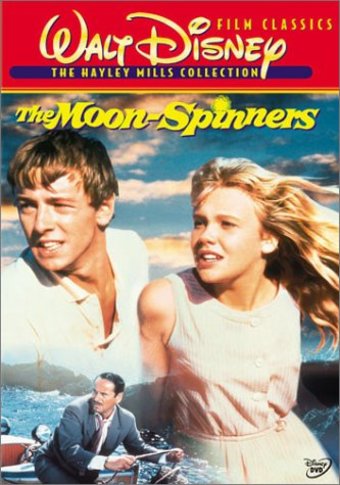 Two American tourists on holiday in Greece find themselves accused of being international jewel thieves. They must uncover the identity of the real crook, or face the unpleasant prospect of spending several years in a Greek prison. A light mystery/romance from the Disney people.

The Moon-Spinners
Start with a fortune in stolen jewels. Add a dash of danger. A pinch of romance. Season with Hitchcock-like intrigue and comic flair. What do you have' A mystery thriller for the whole family ... with the Disney touch. Set against the sun-bleached beauty of the Isle of Crete, the story pits a young English tourist (Hayley Mills) against a wily Greek jewel thief (Eli Wallach). Mistaken identities and perilous escapes -- including a nail-biting battle with a windmill -- lead the junior-miss detective to a final confrontation aboard the yacht of an eccentric millionairess (Pola Negri) with a passion for priceless gems and pet cheetahs!

Two English women, touring the island of Crete and staying at the Moon-Spinner Inn, meet up with a young man, accused of stealing some jewels. They befriend the man and decide to track down the real thief.

22%off
The Great Locomotive Chase
$11.70 Super Savings
Add to Cart

The Truth About Spring
$19
Add to Cart