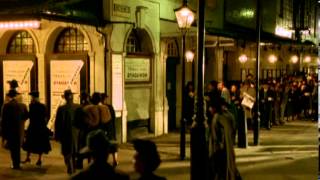 As she enters her early 40s, London theater actress Julia Lambert (Annette Bening) starts having a nervous breakdown. She still rules the West End, but is growing too old for ingenue parts. When Tom Fennell (Shaun Evans), an adoring lad half her age, comes into her life, a clandestine affair begins. Though she's happy for a while, Julia eventually winds up in a face-off with a Tom's other, much younger lover (Lucy Punch). Luckily, the spirit of Julia's cantankerous old acting coach (London theater legend Michael Gambon) follows Julia around offering some tough-love encouragement.

Set in the late 1930s, this is a fine costume comedy-drama about the sorrows and joys of art. The eternal question of "when am I acting and when am I myself'" has seldom been addressed as intelligently as it is here; Bening seems to be not only tangling with her own status as an aging beauty, but also with the limits of her own acting abilities, and it's a pleasure to see her transcend both with such triumphant exuberance. Bravo, Miss Bening, and kudos to director Szabó (MEPHISTO) for rendering his obvious love of theater, cinema, and actors with such contagious warmth. Other fine performances include Jeremy Irons as Julia's manager/husband and Juliet Stevens as her jaded maid.