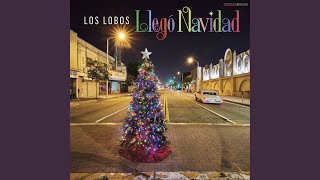 Personnel: David Hidalgo (vocals, guitars, requinto, keyboards, drums); Cesar Rosas (vocals, guitars, bajo sexto, vihuela); Louie P‚rez (vocals, guitars, jarana, drums); Conrad Lozano (vocals, guitarron); Josh Baca (accordion); Steve Berlin (saxophone, keyboards); Chris Sorem (omnichord); Jason Lozano (drums); Alfredo Ortiz (congas, bongos, percussion); Marcos Reyes (congas, timbales, percussion).
Audio Mixer: Chris Sorem.
Liner Note Author: Grant Hier.
Recording information: Nest Recorders, East Los Angeles, CA.
Photographer: Piero F. Giunti.
The problem with the sizable majority of Christmas albums is they sound pretty much the same. Most yuletide records feature the same songs about Jesus or Santa that have been circulating for decades (if not centuries), and regardless of the genre, someone throws in sleigh bells or a "Ho Ho Ho" to remind you that yes, this is Christmas music. So hats off to Los Lobos for making a Christmas album that does something fresh and interesting with songs of the season. For 2019's Lleg¢ Navidad, Los Lobos sifted through dozens of Christmas songs in a variety of Latin genres from South and Central America as well as Mexico (along with a few obscurities from the United States), and what they've delivered is a collection of tunes that (with two exceptions) has flown far under the radar of mainstream listeners in North America. Here the band celebrate the holiday with songs rooted in salsa, cumbia, ranchera, cancion, son jarocho, and Tex-Mex styles, most sung in Spanish, and while there's a genuine warmth and good cheer to these performances, this sounds less like a typical Christmas album and more like a Los Lobos album, which is most certainly a good thing. The group plugs in on a few tracks, but the bulk of Lleg¢ Navidad is dominated by acoustic material, and fans who loved 1988's La Pistola y la Corazon and 2005's Acoustic en Vivo will especially enjoy this. Either acoustic or amplified, this music is performed with the passion, skill, and joy that this band has brought to their work for over 45 years, and listening to them play together is about as pleasurable as American music gets. The album also includes a fresh original tune, an old-school R&B-influenced track called "Christmas and You," and just to give wary listeners something they already know, they close the set with "Feliz Navidad" played like an enthusiastic singalong where friends and family happily shout the chorus, perhaps aided by a beer or two. If you're looking for something to play at your holiday party that's a change of pace, Lleg¢ Navidad will fill the bill quite well, and don't be surprised if it stays in your personal rotation well into the new year. ~ Mark Deming

38%off
Kaleidoscope
Pulsating Dreams: The Epic Recordings (3-CD)
$9.98 on Sale
Add to Cart

Ultimate Summer Hits: Hits of the Summer
$6.97 on Sale
Add to Cart

The Fireballs
Exotic Guitars: From The Clovis Vaults
$18.90 Super Savings
Add to Cart