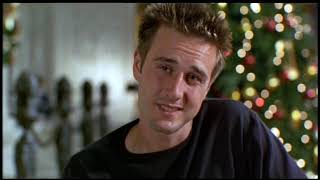 Variety - 01/29/1996
"...The central figures remain compelling throughout, due to two exceptionally strong and well-meshed performances....[Arquette] is both appealing and authoritative..."
New York Times - 01/31/1997
"...[Arquette acts] with a taut, understated ferocity that is absolutely on target....The movie abounds with sharply drawn peripheral characters..."
Los Angeles Times - 01/31/1997
"...Poignant and engaging....There's also a graceful flow an and aptly noirish look to JOHNS..."
Chicago Sun-Times - 04/25/1997
"...Silver does a good job of capturing the unsprung rhythm of the street....David Arquette and Lukas Haas find the right note for their characters..."

A gritty independent film exploring the world of male prostitutes on the streets of L.A. John is a straight hustler, who wakes up on Christmas Eve to discover that his life savings has been stolen. He was going to use the money to celebrate his birthday, and to pay a drug dealer the $300 dollars he owes him. John needs to make some dough fast, but business is slow because of the time of year. Fortunately, help arrives in the form of Donner, John's gay friend and a fellow prostitute. Donner, who's infatuated with John, agrees to help him earn some cash. But when the pair set out to turn tricks, tragedy is the end result.

28%off
The Holiday
$5 Super Savings
Add to Cart