The More the Merrier

The only picture with a DINGLE! 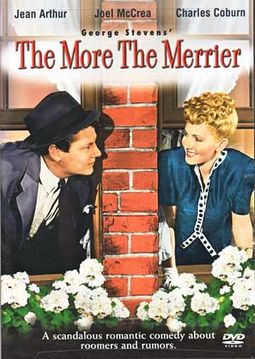 Given George Stevens' penchant for romantic comedy, it's probably not surprising that the WWII housing crunch in Washington, D.C. could provide fertile grounds for his imagination. The city's dearth of apartments has made things difficult even for 60-year-old millionaire Benjamin Dingle (Charles Coburn) who answers an ad for an apartment share only to find a long line of prospective tenants ahead of him. Claiming to be the apartment's tenant, he dismisses the others, before encountering Connie Milligan (Jean Arthur), the real leaseholder. Despite her initial reluctance to rent to a man, she gives him a trial week. While she's out the next day, Sgt. Joe Carter (Joel McCrea) arrives to inquire about the ad, and the enterprising Coburn offers him half of his room, which he accepts. Connie is angry after finding out about the second sublet and orders them both to leave, but realizes she has to let them stay, since she can't return their money, which she's already spent. It's just as well since Dingle, who's noted Carter's unusual interest in Connie, has decided to play matchmaker to the two younger people.

During World War II, civil servant Connie Milligan decides to turn Washington, D.C.'s housing shortage to her advantage. But when she rents out her four-room apartment to two men, Connie gets more than she bargained for.

The Devil and Miss Jones (Blu-ray)
$28
Add to Cart

It Happened One Night
$19
Add to Cart