Sister Act 2: Back in the Habit PG 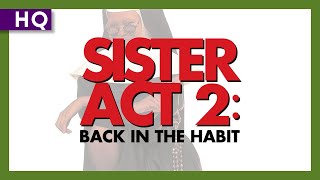 SISTER ACT 2: BACK IN THE HABIT is the sequel to the surprise smash hit SISTER ACT. Whoopi Goldberg returns as Deloris Van Cartier, who, at the film's opening, has become a successful Vegas headliner, belting out undeniably cheesy medleys of R&B hits. The nuns she shielded her identity from in the first film arrive to beg her to help them revitalize their San Francisco Catholic school. Deloris is persuaded to put her Sister Mary Clarence costume back on and work with a bunch of undisciplined street kids as the school's music teacher.

Sister Act 2: Back In The Habit
Everybody's favorite nun is back in the habit as Academy Award(R)-winner Whoopi Goldberg (Best Supporting Actress, 1990, GHOST) stirs up more laughs than ever before! This time, Whoopi goes undercover as Sister Mary Clarence at a troubled inner-city school. Equipped with a melody-marching lesson plan, she brings the gift of laughter, the power of music, and a touch of heavenly inspiration to the classroom -- before the streetwise students discover who she really is! Experience the joys of higher education with this crowd-pleasing favorite as Whoopi answers her calling once again and delivers her special brand of habit-forming fun!

SISTER ACT 2: BACK IN THE HABIT owes a lot to such films as BLACKBOARD JUNGLE and TO SIR, WITH LOVE, where a novice teacher has to find a way to reach impoverished, undisciplined street kids. The film contains some outstanding musical numbers and fine comic performances that make it worth seeing. It also has historical significance as the first Hollywood blockbuster sequel entrusted to an African American director, Bill Duke. Whoopi Goldberg stars as Deloris, who disguises herself as a nun again to teach music at a failing Catholic school. Among her students is Rita (singer/rap artist Lauryn Hill), a talented performer whose mother feels that music is a waste of time. Deloris whips her unruly class into shape and enters them into a state choir competition. Along the way she takes on the school's administrator (James Coburn), who seems determined to shut down the school and sell the land for a parking lot.

The Lair of the White Worm
$12.80 Super Savings
Add to Cart

The Fighting Temptations
$6.40
Add to Cart

Soundtrack
Sister Act 2: Back in the Habit
$7.30
Add to Cart