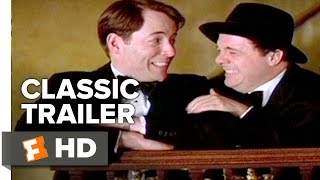 This remake of Mel Brooks' 1968 film features Nathan Lane and Matthew Broderick in the roles that they originated in the smash Broadway adaptation of the original film. Broadway producer Max Bialystock (Lane) is famous for his spectacular opening night flops. Leopold Bloom (Broderick) is an uptight accountant who virtually discovers gold while reviewing Max's books. When Leo realizes that you can actually make more money with a flop than with a hit, the two team up and begin a search for both the worst script and the worst director they can find to ensure failure. The script selection seems easy when the duo stumble upon SPRINGTIME FOR HITLER, an homage to the Fuhrer penned by Franz Liebkind (Will Ferrell), a German sympathetic to the Nazi cause. Convinced that the script will incite outrage, the duo needs a bad director to seal the deal. Campy director Roger DeBris (Gary Beach) and his assistant (Roger Bart) fit the bill perfectly.

But when their scheme fails, Max and Leo find themselves with the worst possible outcome: a hit. To make matters worse, Franz is just a little peeved that Hitler was depicted disrespectfully--and he has a gun. Will Max and Leo survive the playwright's wrath' Will they go to jail for cooking the books' And will Leo ever submit to the advances of sexy Swedish receptionist/actress Ulla (Uma Thurman)' Directed by stage director Susan Stroman, making her feature film directorial debut, this riotous romp features lots of laughs from the major players, as well as brief appearances by Jon Lovitz, Michael McKean, and Richard Kind. Lane and Broderick make it easy to understand why the show was an unprecedented hit on Broadway, and Ferrell is a scene-stealer as Liebkind.

Love By Appointment (aka Holiday Hookers) (DVD)
$8.98 on Sale
Add to Cart