13K ratings
Currently Out of Stock: We'll get more as soon as possible
Notify Me When Available
Add to Wishlist
Format:  DVD
item number:  36EQD
Different formats available:
Lover Come Back (Blu-ray) for $12.50
91% recommend us! 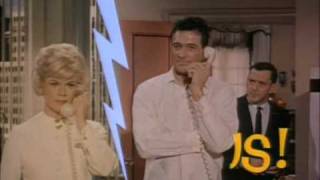 Both a screwball comedy and a satire of the advertising business, Delbert Mann's LOVER COME BACK was the second panel in the Hudson-Day comic tryptich. Advertising account executive Carol Templeton (Doris Day) is infuriated by the ease and sleaze with which Jerry Webster (Rock Hudson), her rival at another ad outfit, attracts big accounts to his firm by plying the clients with demon rum and long-legged chorus girls. When she reports him to the Ad Council, he sends buxom Rebel Davis (Edie Adams) to charm the (all-male) council into a state of blissful inertia. To thank Rebel Davis for her work, Jerry shoots a number of commercials with her for a fictional product called VIP, not intending to use them. But when his perennially bewildered boss Peter Ramsey (Tony Randall) mistakenly airs the commercials, Jerry is forced to come up with a real product. Carol gets wind of this novelty and, determined to land the account, looks up Linus Tyler (Jack Kruschen), the scientist that Jerry hired to create VIP. Always a step ahead of the game, Jerry disguises himself as Tyler to acquaint himself with his attractive competitor. Despite the 1950s stereotypes that colored most gender comedies of the period, the deftness and wit of Hudson, Day, and Randall make this film a genuinely amusing farce.

Rival Madison Avenue ad executives Jerry Webster and Carol Templeton battle it out -- in hilarious fashion -- for control of a product that doesn't even exist. In the process, the two fall in love.
Jerry comes up with the idea for a product called VIP. But before the merchandise can actually be created, his bumbling boss, Peter Ramsey, accidentally announces that VIP is already available for sale.
When Carol finds out about the new product, she desperately tries to win the account from the man who supposedly developed it. To get her off track and keep her away from the real scientist working on VIP, Webster makes believe he's the inventor. Templeton falls for his scam and attempts to convince him that she should get the new account. Meanwhile, Jerry's masquerade grows more and more complex as he also tries to seduce Carol.
Will Jerry succeed or will Carol figure out what he's up to and turn the tables on him'

Move Over, Darling
$19
Add to Cart

That Touch of Mink
$17.20 Super Savings
Add to Cart