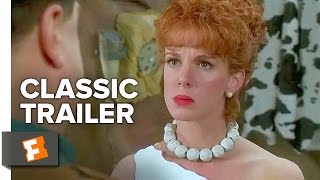 "Flintstones! Meet the Flintstones! They're the modern Stone Age fa-mi-ly."
"Yabba-dabba-do!"
"Wilm-a-a-a!"
"I should have signed with Disney. They'd never allow this sort of thing to happen."

Yabba dabba doo! That modern stone-age family is back and on the big screen in this live-action version of the beloved cartoon series. When Fred Flintstone (John Goodman) generously loans his pal Barney Rubble (Rick Moranis) enough money to adopt a child, Barney wants to return the favor. So he helps Fred on his IQ test at the quarry... which gets Fred an executive position. But what Fred doesn't know is he's the sap meant to take the fall for a bunch of corporate con-men out to rook the company. The all-star cast is rounded out by Elizabeth Perkins as Wilma Flintstone and Rosie O'Donnell as Betty Rubble, with special appearances by Halle Berry, Elizabeth Taylor, Jay Leno, and the B-52's.

Honey, I Shrunk the Kids
$5.80 Super Savings
Add to Cart