The most powerful legend of all is back in a new adventure. 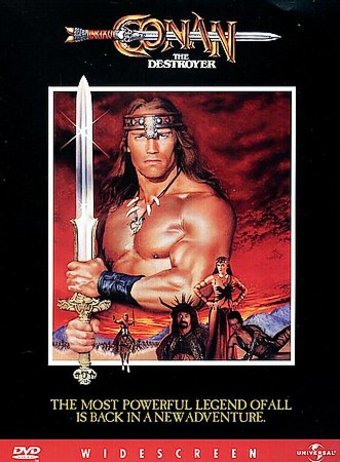 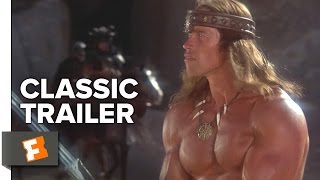 "What is a sword against sorcery'"
- Conan (Arnold Schwarzenegger) to Queen Tamaris (Sarah Douglas)
"What are they going to do'"--Princess Jehnna (Olivia d'Abo) on seeing Akiro (Mako) being roasted above a fire by cannibals
"Have lunch."
- Malak (Tracey Walter)
"Wizard it open."
- Malak to Akiro

Following CONAN THE BARBARIAN, Arnold Schwarzenegger returns as Robert E. Howard's warrior hero in action director Richard Fleischer's CONAN THE DESTROYER. First seen praying at a shrine, Conan and his sidekick, Malak (Tracey Walter), are inveigled by Queen Taramis (Sarah Douglas) into joining Princess Jehnna (Olivia d'Abo) and her bodyguard, Bombaata (Wilt Chamberlain), on a quest to wrest a magic key from the wizard Toth-Amon (Pat Roach). On the journey, Conan saves his magician friend, Akiro (Mako), from cannibals and helps female bandit Zula (Grace Jones) as she fights off some angry villagers. The motley crew find Toth-Amon's castle in the middle of a lake. But, while they rest for the night before confronting the wizard, he spirits away Princess Jehnna. Conan leads the rescue.

Compared to the first Conan movie, CONAN THE DESTROYER has less violence but more humor. The film's stunt casting includes the 7-foot-tall basketball player Wilt Chamberlain and pneumatic singer Grace Jones. Other actors featured are the 17-year-old Olivia d'Abo (in her first screen appearance), playing the petulant teenage princess with sexy innocence; Tracey Walter as the cowardly jewel-swallowing thief, Malak the Quick; and, of course, Schwarzenegger, who put on 10 extra pounds at Fleischer's request, as the pectorally-perfect Conan.

In his quest for a magic treasure, Conan must do battle with wizards, warriors, and great beasts, as well as cross a mystical desert.
Schwarzenegger is back as Conan in this sequel to the action fantasy "Conan the Barbarian." This time the fearless warrior embarks on an epic quest for a magical jewel. Along the way he must protect a virgin princess who is about to sacrificed by an evil queen, vanquish a hideous monster known as Dagoth, and fend off the queen's henchman (as embodied by Wilt Chamberlain). Real-life Amazon Grace Jones also makes an appearance as Conan's feisty female sidekick.