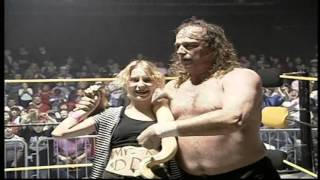 Filmmaker Barry W. Blaustein takes a look at the professional wrestling game at every level, from the hopeful, perhaps deluded beginners who spend their money on wrestling schools, to the lower levels of the profession, to the pinnacle of wrestling success: national fame in the WWF. Particularly fascinating are Blaustein's examinations of Jake "The Snake" Roberts and Mick "Mankind" Foley. Roberts was once a superstar in the WWF, but evidently drugs and alcohol destroyed his career, and left him a broken and bitter man, wrestling on the outer reaches of the pro circuit. In a poignant scene, Blaustein captures a painful reunion between Roberts and his adult daughter. Foley, on the other hand, is a tremendous success in the WWF and a devoted husband and father. But the violence of his profession still threatens to tear his family apart. Blaustein makes no bones about his perspective in making his film. He's a wrestling fan. That said, the film offers an honest view of the outrageous and controversial world of professional wrestling. Though the outcomes of matches are usually predetermined making it a different kind of sport, pro wrestling is certainly a demanding and brutal way of life.

Fighting with My Family
$8.40 Super Savings
Add to Cart