The Who Amazing Journey: The Story of The Who / Six Quick Ones (2-DVD) 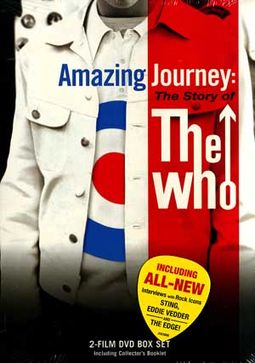 This epic two-volume set matches the grand sounds created by one of rock's most influential bands. AMAZING JOURNEY: THE STORY OF THE WHO chronicles the group's reign in music history with two full-length feature documentaries. In THE STORY OF THE WHO, all four band members--Roger Daltrey, Pete Townshend, John Entwistle, and Keith Moon--share their thoughts on their rise to fame. This documentary also includes rare film footage, as well as praise from famous fans such as Eddie Vedder, U2's The Edge, and Sting. SIX QUICK ONES features four short films that focus on each of the band's musicians, all legends in their own right. This second volume also features WHO ART YOU', an exploration of the band's connection to visual art, and WHO'S BACK, a film from D.A. Pennebaker (DON'T LOOK BACK) about the band's 2003 return to the studios. Both casual and avid fans of the rockers will be pleased by the exhaustive and exhilarating footage found in AMAZING JOURNEY.