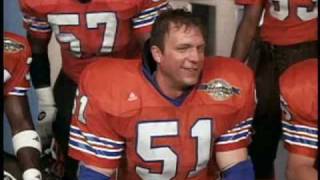 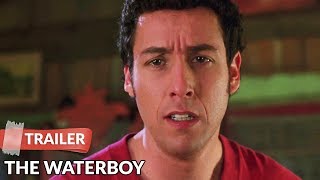 "I'm gonna open up a can of whupass." Bobby (Sandler)

Bobby Boucher (Adam Sandler), the much-abused waterboy of a successful college football team, gets fired but finds his true calling as a player for the neighboring down-and-out team. Unfortunately, his Momma doesn't approve of football (or as she calls it, foosball) and Bobby has to keep his gridiron success a secret. One of Sandler's biggest hits, featuring a group of bizarre Cajun characters and a sweetly goofy plot.

The Waterboy
America's favorite wild and zany funnyman, Adam Sandler (50 FIRST DATES, MR. DEEDS, PUNCH-DRUNK LOVE), scores big laughs in a smash comedy hit where the laughs never run dry! Just an oddball mama's boy from the back bayous of Louisiana, Bobby Boucher (Sandler) never wanted anything more than to quench the thirst of the dehydrated athletes who treat him like dirt! But when Coach Klein (Henry Winkler -- HOLES, TV's HAPPY DAYS) makes the call that allows Bobby to finally stand up for himself, it unleashes a torrent of bottled-up frustration ... and exposes a talent for tackling that transforms him from a meek "water distribution engineer" into the hardest hitter ever to roam the gridiron! Also featuring award-winning Kathy Bates (ABOUT SCHMIDT, TITANIC, MISERY) and sexy Fairuza Balk (ALMOST FAMOUS, RETURN TO OZ) in a hilarious cast of stars -- here's your chance to join the millions everywhere who've proudly stood and cheered for The Waterboy!

Adam Sandler is charming and disarming as he dusts off and mashes together his beloved SNL charcters Cajun Man and Canteen Boy to create Bobby Boucher, the sweet-tempered, simple-minded, bayou man-child who relishes his job of eighteen years as the much-abused waterboy for the local "good" (well-funded but nasty of spirit) university's football team. True to the appropriate cine-formula, there is also a nearby "bad" (under-funded but generous of spirit) university where Bobby seeks tenure after finally being driven away from his long-time place of employment by the relentless cruelty of those whom he seeks only to refresh and hydrate. It is under the kindly tutelage of the "lesser" university's down-and-out football coach (Henry Winkler phones it in, but warmly) that Bobby realizes his unusual athletic prowess and develops some basic people skills. Kathy Bates has an enormous amount of fun, and is a laugh riot, as Bobby's earthy, over-protective, swamp-shack-dwelling mom; and Fairuza Balk is accessibly luscious in a Daisy Mae turn as Bobby's resourceful, tomboyish, creole-cutie sweetheart. Deadpan delivery, satisfying sight gags, and "elbow-your-neighbor-and-point-at-the-screen" cameos make this an attractive option for fans of the genre.