12K ratings
Out of Print: Future availability is unknown
Notify Me When Available
Add to Wishlist
Format:  DVD
sku:  36EXH
Our customers love us! 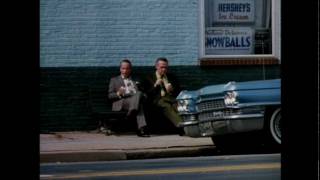 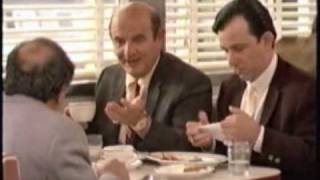 Set in 1963 Baltimore, Barry Levinson's TIN MEN is a comical vendetta with a twist. As aluminum siding salesman B.B. (Richard Dreyfuss) takes the wheel of his brand-new Cadillac, he's involved in an accident with Tilley (Danny DeVito), who, coincidentally, also drives a Cadillac and sells siding. Soon after the accident, the nasty game of revenge and one-upmanship begins with each man vandalizing the other's Caddy. But ladies' man B.B. raises the stakes when he deliberately seduces Tilley's lonely and unhappy wife, Nora (Barbara Hershey). The second installment of Levinson's Baltimore Trilogy--which also includes DINER and AVALON--TIN MEN is brimming with nostalgia, recalling the days when salesmen went door-to-door and devised elaborate scams to win over customers. It also delves into the hearings related to the code of ethics instituted by the Maryland Home Improvement Commission in 1963 that stopped the more creative salesmen in their tracks. The first-rate supporting cast includes John Mahoney, Bruno Kirby, and Michael Tucker. Music from Fine Young Cannibals, who also appear in the film, gives the soundtrack a 1960s feel with a fresh edge.

Tin Men
Cruise back to Baltimore 1963, to the time and turf of a rare American breed: the "tin man" (aluminum siding salesman). Two less-than-honest rivals in the tin game (Richard Dreyfuss and Danny DeVito) meet in a fender bender, but their bruised egos and quick tempers turn the minor accident into a major vendetta against each other's symbols of success -- their prized Cadillacs. In what would seem to be a coup de grace, Dreyfuss decides to seduce DeVito's neglected wife (Barbara Hershey), but this romantic maneuver causes nonstop twists and turns to both the heart and the funnybone. With a supporting cast that's absolutely classic and music by The Fine Young Cannibals, TIN MEN sounds as good as it looks!

Two aluminum siding salesmen crash into each other on the road and find, to their distress, that their beloved Cadillacs got damaged in the process. What started as an accident soon ignites into an out-and-out feud as the two struggle to outdo each other in nastiness. At first, revenge is sweet, but as the stakes go up both men discover that their ongoing animosity will cost them dearly--personally and financially.