The Third Man on the Mountain G

Conquering the past would be the climb of his life

1.4K ratings
Currently Out of Stock: We'll get more as soon as possible
Notify Me When Available
Add to Wishlist
Format:  DVD
item number:  36EX7
91% recommend us! 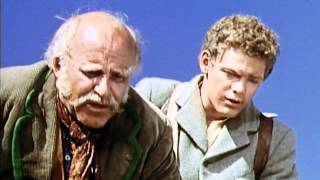 Third Man On The Mountain (Trailer)

In this fine Disney adventure based on a true story, Rudi Matt (James MacArthur), employed as a kitchen worker, decides to climb to the top of the Citadel, the same treacherous climb that had taken the life of his father. With the support of a renowned English mountain climber (Michael Rennie) and his loving girlfriend (Janet Munro), Rudi vigorously trains for, and then conquers, this dangerous quest. This film was shot on location in Zermat, Switzerland, and features breathtaking views of the mountain scenery.

Third Man On The Mountain
Based on a true story, here is the thrilling, critically acclaimed account of Rudi Matt (James MacArthur), a young kitchen worker who is determined to conquer the Citadel -- the jagged, snowcapped peak that claimed his father's life. Encouraged by both a famed English climber (Michael Rennie) and the youth's devoted girlfriend (Janet Munro), Rudi goes through a grueling training period before he is ready to face the incredible dangers of the killer mountain. Shot on location in Zermatt, Switzerland, and featuring spectacular scenery and an outstanding cast, THIRD MAN ON THE MOUNTAIN is one of the finest adventure films of all time!

22%off
Miracle of the White Stallions
$11.70 Super Savings
Add to Cart

16%off
Those Calloways
$8.40 Super Savings
Add to Cart

19%off
The One and Only Genuine, Original Family Band
$12.20 Super Savings
Add to Cart