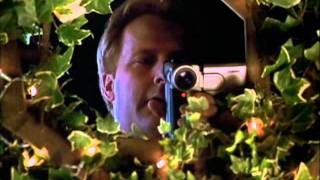 The 1960s television series is updated for the 1990s in this computer-effects heavy family effort. Television reporter Tim O' Hara (Daniels) thinks he has the story of the century when he stumbles across a real-life Martian (Lloyd). While trying to gain evidence of the landing, however, the alien moves into to Tim's house, posing as his "Uncle Martin." Tim, Martin, and Martin's talking space suit "Zoot" then find themselves trying to avoid the discovery of their secret by an evil scientist. Look for original TV martian Ray Walston in a small role!

My Favorite Martian
Disney's hilarious MY FAVORITE MARTIAN is an intergalactic comedy that crash-lands the classic television series into the nineties! This hilarious adventure begins when an ambitious TV reporter, Tim O'Hara (Jeff Daniels), stumbles upon a Martian (Christopher Lloyd) who has just crashed on Earth! Thinking this is the story of the Millennium, Tim schemes to expose the Martian -- who has taken human form as "Uncle Martin." When Tim's efforts are constantly foiled by Uncle Martin's crazy antics, he decides to help the resourceful alien return home. With the government hot on their trail and a spaceship in pieces, can they blast Uncle Martin off in time' Wild special effects create outrageous laughs, including aliens morphing, cars shrinking, objects floating, and Martin's rowdy spacesuit, Zoot. Also starring Elizabeth Hurley (AUSTIN POWERS), Daryl Hannah (SPLASH), and Ray Walston (from the original "My Favorite Martian" television series), MY FAVORITE MARTIAN keeps kids and parents entertained over and over again with its fast-paced action and nonstop laughs!

Flight of the Navigator (DVD)
$6 Super Savings
Add to Cart