The Horse in the Gray Flannel Suit G 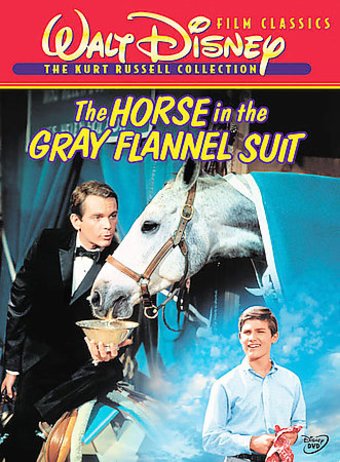 A harried New York ad executive (Jones) is in trouble, at home as well as the office. His daughter is a gifted horse rider who wants nothing more than to own her own horse, but with dad's meager budget he simply can't afford it. Added to that is the order from his boss that he invent an interesting ad campaign for the company's newest product, a stomach pill called "Aspercel." When he decides that the best thing to do is to buy a horse for his daughter and name it "Aspercel," the results aren't an immediate success. A fun Disney movie for the whole family.

The Horse In The Gray Flannel Suit
This fast-paced, rollicking Disney adventure combines fatherly love and corporate survival with exciting horseplay and budding romance. The highjinks begin when harassed New York advertising executive Fred Bolton (Dean Jones) acquires a horse for his painfully shy daughter as part of a hurriedly conceived promotional campaign. With help from an attractive riding instructor (Diane Baker), and his daughter's would-be boyfriend (Kurt Russell), Fred hopes the horse will bring his client fame, save his own job, and just maybe finance his daughter's expensive equestrian habit! AS must-see for every Disney fan and lover of good wholesome old-fashioned fun..

The Little Mermaid
$19
Add to Cart

The Misadventures of Merlin Jones (DVD)
$10
Add to Cart