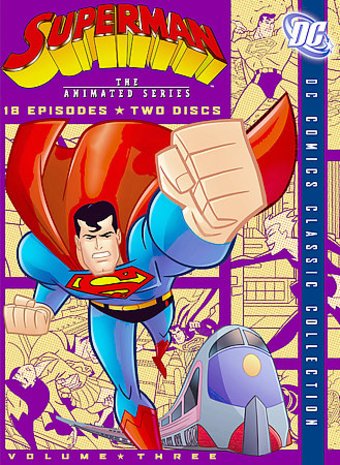 Following the lead of the retooled BATMAN cartoons, the legendary Man of Steel gets his own modernized update in SUPERMAN THE ANIMATED SERIES. Operating under the auspices of his meek, bespectacled alter ego, Clark Kent, Superman continues to champion truth and justice while battling criminal entities in the bustling city of Metropolis. Airing from 1996 to 2000, this animated series is acclaimed for remaining true to the original SUPERMAN comic books while introducing new and exciting storylines and characters. In season three of the series, Superman battles the fire-controlling Volcana, the Bizarro Superman, Mr. Mxyzptlk, the robot Metallo, the evil computer Brainiac, and other super-villains. Superman even travels to Gotham City and dresses up as Batman for a while because the caped crusader has gone missing.