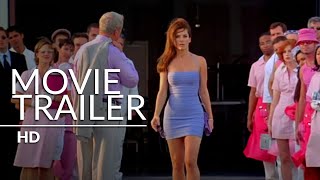 "I haven't seen a woman like that since Jurassic Park."
- Victor Melling (Michael Caine)
"You think I'm gorgeous. You want to kiss me."
- Gracie Hart (Sandra Bullock) to Eric Matthews (Benjamin Bratt)

When a notorious criminal mastermind known only as the Citizen threatens to terrorize the Miss United States Pageant, the FBI scours their ranks to find a female agent capable of winning the contest and capturing the killer before it's too late. Special Agent Gracie Hart (Sandra Bullock) may be the most physically beautiful woman in the Bureau, but her tomboyish lack of feminine grace jeopardizes the plan and spells disaster. Forced to turn to the once-proud beauty pageant consultant Victor Melling (Michael Caine), Agent Eric Matthews (Benjamin Bratt) tries to accomplish the impossible goal of transforming Hart from an unrefined rogue to a model candidate of elegance, poise, and style, with the irresistible power to win the pageant and simultaneously catch the killer. MISS CONGENIALITY combines the hilarious physical comedy and girl-next-door charm of Sandra Bullock with Michael Caine's trademark British wit and impotent outrage, adding up to a devastating orgy of comedy, glamour, and catastrophe.