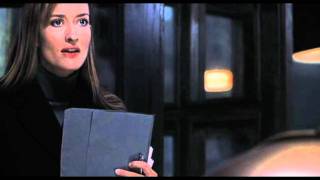 FEAR.COM just may be the cure for the common addiction to surfing the net. Leave it to William Malone, the director of the relentlessly mortifying HOUSE ON HAUNTED HILL to take a scary situation and make it infinitely worse. This time it's not the house that's haunted, it's the computer, and it is actually killing people too. Stephen Dorff and Natasha McElhone play two insipid but earnest cops on the trail of a virtual murder suspect, while the deeply unsettling Stephen Rea is a torture fiend who lures bafflingly dim-witted women into the most horrifying locations he can find and gets it all on tape.

FEAR.COM borrows the noirish overtones of David Fincher's SEVEN, the graphic imagery of Tarsem Singh's THE CELL and some of the so-called realistic, handheld video techniques of the first BLAIR WITCH. There are many promising combinations of psychological imagery here, suggesting Malone may be hitting his stride after successfully breaking free of the Hollywood haunted house domain. FEAR.COM is not for the faint of heart (though HOUSE ON HAUNTED HILL was arguably more violent and disturbing). If you love a good horror flick there are a few serious freak-outs here you simply would not want to miss.