13K ratings
Currently Out of Stock: We'll get more as soon as possible
Notify Me When Available
Add to Wishlist
Format:  DVD
item number:  LMTB 32282D
Our customers love us! 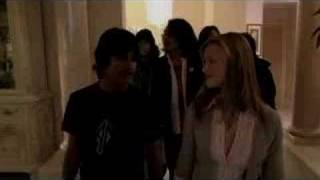 In 1995, photographer Larry Clark burst onto the indie scene with the controversial KIDS, a tough, realistic look at a group of teenagers hanging around the seamier side of New York City, getting involved in sex and drugs amid the AIDS crisis. A decade later, Clark (BULLY, KEN PARK) went across the country to make WASSUP ROCKERS, about a group of Latino teenagers experimenting with sex, playing and listening to punk rock, dressing in their own style, and looking for the perfect place to skateboard. The seven teens, led by Jonathan (Jonathan Velasquez), take two buses to get to Beverly Hills High, where they start boarding down difficult steps. They are excited when two white students, Jade (Laura Cellner) and Nikki (Jessica Steinbaum), invite them to their house, but they are soon on the run after being harassed by a racist cop (Chris Neville). They make it to the huge house, but they have to take off again when Jade and Nikki's rich white male friends catch them there, sending them off on a perilous journey through ritzy Beverly Hills as they try to get back to South Central--what one of them proudly calls the Ghetto. No matter how hard the kids try, they are unable to avoid violence; it is too entrenched in their dangerous world. In this gritty urban drama of class conflict, racism, and boys just trying to be boys, Clark displays how deep the ills of society still go, all set to a raging punk soundtrack featuring songs by such bands as South Central Riot Squad, the Remains, Moral Decay, and the Retaliators.