Mike Zito Live from the Top 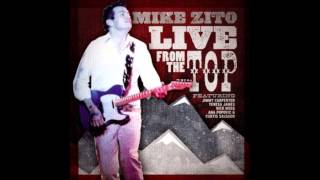 Blues Music Award-winner Mike Zito to reissue Live From The Top on Gulf Coast Records. Gulf Coast Records was recently launched by founders Mike Zito and Guy Hale. Live From The Top was originally recorded at the 2009 Blues From The Top Festival at the Smoking Moe s after party in Winter Park, CO. Two nights of live recording, produced by David Z. This rocking set includes some of the best in the blues: Curtis Salgado, Ana Popovic, Nick Moss, Jimmy Carpenter, Teresa James. This recording captured the live energy Mike Zito was becoming famous for and just on the heels of his first Blues Music Award for Song of the Year Pearl River. Guitarist Mike Zito was born in St. Louis, Missouri and got his start in music by singing at local events at a young age. As a teenager he picked up the guitar and began playing regularly around his hometown. By 2008 Zito was releasing records on his own self-titled label while touring the U.S; this was also the year he signed with Eclecto Groove Records and released Today. Pearl River was released the following year, and Zito was awarded Song of the Year at the 2010 Blues Music Awards for the title track off that album. Zito released his final session on Eclecto Groove, Greyhound, in 2011. A track taken from that session, Roll On, was featured on the TV show Sons of Anarchy. Also in 2011, Zito formed Royal Southern Brotherhood with Cyril Neville, guitarist Devon Allman, bassist Charlie Wooton, and Yonrico Scott. The group released its self-titled debut album on the Ruf label in 2012. In 2013, Zito featured his new backing band the Wheel on the studio album Gone to Texas. Well received, the album garnered a Blues Music Award nomination for "Rock Blues Album of the Year." The Wheel were also on board for the guitarist's Songs from the Road in 2014. In May 2014, Royal Southern Brotherhood won the Blues Music Award for "Best DVD" for the band's Ruf Records release Songs from the Road - Live in Germany. In 2016, Zito delivered the Tom Hambridge produced Make Blues Not War, and two years later he delivered First Class Life, which debuted at No. 1 on the Billboard's Blues Albums Chart. In 2018, Mike Zito was honored with a Blues Music Award for "Blues Rock Artist of the Year . Most recently, Mike Zito and partner Guy Hale founded Gulf Coast Records which already has a solid roster of artists including Albert Castiglia, Billy Price, Diana Rein, Jimmy Carpenter, Tony Campanella, and more!

Bernard Allison
Born with the Blues
$11.80
Add to Cart