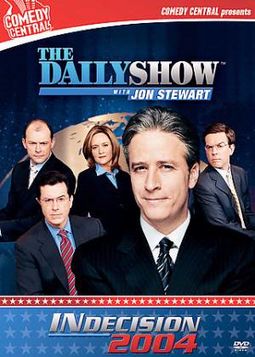 It's a sad commentary on the state of mainstream media when a comedy show offers sharper political analysis than anything the major network or cable news outlets can muster. All throughout the highly contentious 2004 American presidential election, comedian Jon Stewart and his cohorts on Comedy Central's "fake news" program THE DAILY SHOW cut through the political miasma with scathingly hilarious satire that was no more absurd than the campaign it lampooned. As Stewart anchored the proceedings with his trademark incisive wit and bemused facial expressions, a crack team of correspondents--comedians Samantha Bee, Rob Corddry, Ed Helms, and, of course, the inimitably deadpan Stephen Colbert--wryly offered both pre-recorded and on-the-spot reporting of the election's primaries, debates, conventions, and other newsworthy foibles. INDECISION 2004 collects the best of these segments in uncensored editions, presenting all four episodes from the Democratic National Convention in Boston; all four episodes from the Republican National Convention in New York; a parody of the first televised debate, "The Bush-Kerry Debate: The Squabble in Coral Gables;" the election-night special, "Election Night 2004: Prelude to a Recount;" and other highlights of the irreverent yet insightful campaign coverage that earned THE DAILY SHOW two Emmy Awards and its second prestigious Peabody Award.