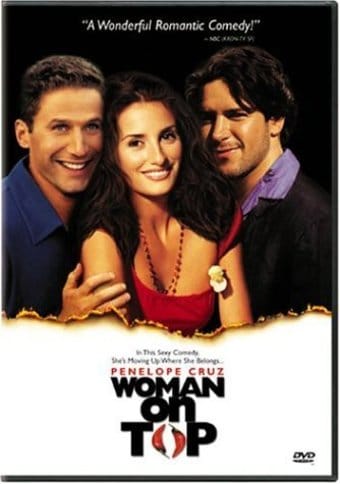 18K ratings
Currently Out of Stock: We'll get more as soon as possible
Notify Me When Available
Add to Wishlist
Format:  DVD
item number:  XTX 01654D
Also released as:
Woman on Top for $3.98
91% recommend us!

Director Fina Torres presents a sweet and sour love story/fairy tale with WOMAN ON TOP, the quirky story of Isabella (Penelope Cruz) a top-notch chef and glowing beauty who suffers from motion sickness. Playing up all of these characteristics, the film explores two of Cruz's love affairs: one with a restaurant-owner, and the other with the television producer of a cooking program. A captivating, sometimes hilarious story, WOMAN ON TOP is a romantic and fun film with a lively Brazilian spirit.

Venezuelan filmmaker Fina Torres's (CELESTIAL CLOCKWORK) third feature is a colorful, comedic fantasy about food and love. Beautiful young Brazilian chef Isabella (Penelope Cruz) works at her life's passion: cooking, alongside her sexy restaurateur husband, Toninho (Murilo Benicio). Unfortunately, Isabella is hidden in the kitchen while Toninho takes the credit. In certain situations, though, Isabella must seize control--while driving and while having sex--in order to overcome her crippling motion sickness. Eventually, macho Toninho tires of Isabella being on top in bed, so he cheats on her with another woman. Discovering his tryst, the shattered Isabella flees Brazil for San Francisco, to stay with her friend Monica (Harold Perrineau, Jr.), a fun-loving transvestite. Starting a new life is difficult, however, as Isabella has trouble finding a job and even more trouble forgetting her husband. In desperation, she makes an offering to Yemanja, the goddess of the sea, and asks for help. With Yemanja's help, Isabella meets a handsome television producer, Cliff (Mark Feuerstein), who wants the lovely chef to be the star of a new cooking show. Just when Isabella's life seems to be falling into place, a distraught Toninho arrives to shake things up. Featuring a heartfelt, truthful performance by Cruz, Torres's tale is one of magical realism, mysticism and true love.

60%off
Robert Dubac - Inside the Male Intellect (DVD)
$3.98 BLACK FRIDAY
Add to Cart