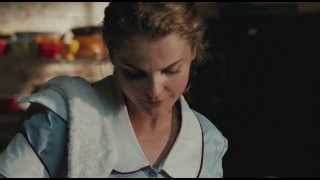 This charming comedy from late director-writer-actress Adrienne Shelly is the perfect mix of sweet and sour. FELICITY'S Keri Russell stars as Jenna, a waitress stuck in a marriage to a less-than-lovable lout (Jeremy Sisto, SIX FEET UNDER). When she learns she's pregnant with his baby, she seeks solace in two things: pie-baking and an extramarital affair with her hunky but nervous OB-GYN Dr. Pomatter (Nathan Fillion, SERENITY). Jenna is an artist with crusts and fillings, creating a ham-and-brie quiche (which she calls "I Don't Want Earl's Baby Pie") and a cinnamon spice custard confection ("Kick in the Pants Pie"). Her relationship with her doctor gives her something to look forward to as her husband grows ever more controlling and her baby bump gets larger.

Like Jenna's perfect pie recipes, WAITRESS is a heavenly combination of ingredients. The stellar cast also features Shelly, Cheryl Hines (CURB YOUR ENTHUSIASM), and Andy Griffith. Griffith is a particular treat as the cantankerous owner of the restaurant where Jenna works. Eddie Jemison (OCEAN'S 11) is also a highlight as an overeager poetry-penning suitor to Shelly's character. Just like in SLITHER and FIREFLY, the charming Fillion proves that he should be far more famous than he is. Each of the talented actors is given funny and genuine lines from Shelly's script, elevating both the cast and the material. Like LITTLE MISS SUNSHINE, WAITRESS may not be the most original of indie films. But thanks to a great cast, gorgeous cinematography, and a warm and witty script, this is a film that deserves the accolades that LITTLE MISS SUNSHINE earned.

Where the Heart Is
$8.70 Super Savings
Add to Cart