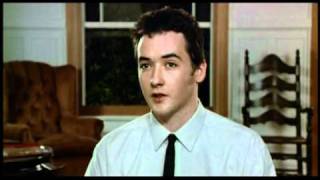 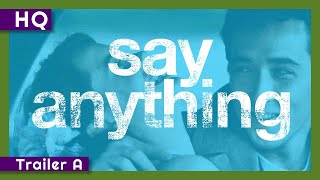 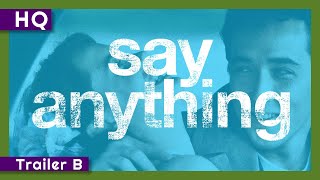 The quintessential '80s teen romance, this film has retained its poignancy into the next century with its ability to entertain and amuse while remaining intelligent and packed with real emotion that anyone can empathize with. John Cusack plays Lloyd Dobler, a high schooler on the cusp of graduation who devotes himself to the pursuit of Diane Court (Ione Skye), the aloof class valedictorian who happens to be beautiful as Corey (Lily Taylor), Lloyd's best friend puts it, "a brain trapped in the body of a game show hostess." When Lloyd calls Diane to invite her to a graduation party, she doesn't know who he is, but she's charmed by his nervous chatter and surprises everyone by accepting. Lloyd at first even manages to charm Diane's overprotective father Jim Court (John Mahoney) as well, with whom Diane is very close, though Jim can't see why his daughter is wasting her time with Lloyd.

The party scene in SAY ANYTHING ranks among the best ever, with Eric Stoltz making a cameo as the party host, Lily Taylor as the ultimate lovelorn rock chick, and even Chynna Phillips putting in an appearance. After their successful first date, Diane asks Lloyd to dinner with her father and some of his associates; there, when asked his plans for the future, Lloyd lets loose a speech way ahead of its time, which slackers everywhere will be able to appreciate. Unfortunately, Jim Court does not, and Lloyd's professed intention to "spend as much time as possible with your daughter" strikes a chord of horror for him; he wages a campaign to sabotage the relationship, which almost succeeds. But when Jim's secrets come to light, Diane is forced to question who it is she can really trust in her life.

Cameron Crowe's film, which he made when he was only 21, is told with honesty, humor, and emotion that never crosses into the realm of the sappy. Cusack's character, who might verge on the cheesy or the stalkeresque if played by someone else, manages to be a unique, charming, stand-up guy with a heart of gold, while retaining a bit of a dark side that rounds him out. Outstanding performances are turned in by all involved, and this film proves once again Crowe's place as the spokesman for teen love and romance in general.

John Cusack plays Lloyd Dobler--an average guy with a penchant for kickboxing--in Cameron Crowe's (SINGLES, JERRY MAGUIRE) first film. There is only one thing that all-around nice guy Lloyd wants for his high school graduation: a date with beautiful valedictorian Diane Court (Ione Skye). Lloyd's dream comes true when Diane accepts his invitation to a graduation party. Diane falls for Lloyd, whose goal is to spend as much time with her as possible. Their budding romance is put to the test when Diane has to choose between pursuing her academic dreams and spending time with him. John Mahoney is first-rate as Diane's father, a single parent who wants only the best for his brilliant daughter but who harbors a serious secret that the IRS is investigating. Like John Hughes's classic films of the 1980s (PRETTY IN PINK, THE BREAKFAST CLUB) that dealt with the trials and tribulations of being a teenager, Crowe's intelligent script and film cut through stereotypes and portray teenagers as real people rather than caricatures.

Some Kind of Wonderful
$6.40
Add to Cart