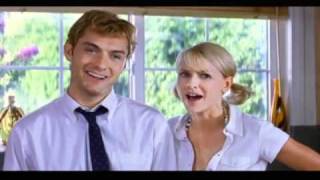 David O. Russell, the director of dark incest comedy SPANKING THE MONKEY, slapstick ensemble FLIRTING WITH DISASTER, and Gulf War adventure THE THREE KINGS, has established himself as a boldly original filmmaker. With his fourth film, I HEART HUCKABEES, Russell continues to defy easy definition, mixing physical comedy, existential philosophy, corporate satire, and quixotic quest. Jason Schwartzman, proving that he is capable of more than simply reviving his iconic RUSHMORE character, plays Albert, an environmental activist prone to bad poetry and self-doubt. During his campaign to stop Huckabees, a suburban superstore, from destroying marshland, Albert's group is taken over by one of the store's vapidly charming salesmen, a pitch-perfect Jude Law. Utterly distraught and questioning the meaning of life, Albert seeks the help of a bizarre husband-and-wife team of "existential detectives." By spying on Albert's daily life, they seek to help him answer that most elemental of human questions, "Why am I here'"

A stellar ensemble class including Naomi Watts, Dustin Hoffman, Lily Tomlin, Isabelle Huppert, and an inspired Mark Wahlberg manage to do justice to the sparkling wit and intelligence of the script. In less adept hands, the pace and complexity of the film could easily become a chaotic mess. Yet Russell, in what is arguably his finest film to date, proves that a movie need not be esoteric to tackle the profound.