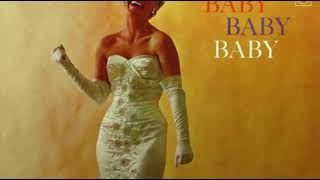 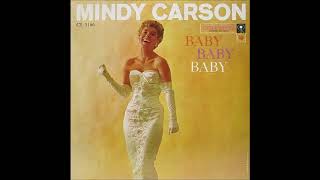 The delectable springtime freshness that is singer Mindy Carson is here exhibited in two guises, one somewhat slow and moody, the other bright and cheerful, and both of them having to do with romance in its various forms. This album was original released on the Columbia label in 1958 - the reissue contains an additional five tracks, three of which were available as Columbia singles and two previously unreleased tracks.

Originally released on Columbia (1166).
Recording information: 09/10/1957-07/14/1958.
Use of the word baby isn't improved by repetition. Though it doesn't crop up often on this "concept" record including only songs with the word baby in the title, Mindy Carson's vocal histrionics succeed only in dating Baby, Baby, Baby as a relic of its time. Blessed with a strong voice that she wielded with much talent, Carson had unfortunately devolved, by the time this was recorded in 1958, into a belter who attempted to equal the lungs of Kay Starr without her impeccable jazz smarts. There are many excellent songs that fit the bill for entr‚e on this record -- "I Can't Give You Anything but Love, Baby," "My Baby Just Cares for Me," "My Melancholy Baby" -- and the charts by Glenn Osser and Sherman Edwards goose a well-worn standard quite well, but Carson fails to let any syllable cross her lips without worrying it to death. ~ John Bush


This is a great album and I hope Oldies.com could come up
with another superb cd album containing her haunting Song
title SINCE I MET YOU BABY and that would be great!


This will be a most welcome reissue. I hope the
bonus tracks include her great version of "Wake the
Town and Tell the People" and "Memories Are Made of
This". This is a terrific album and I am glad
Collectables is doing it. Let's hope Rhonda Fleming's RHONDA and Sylvia Syms' SYMS BY SINATRA
will be reissued soon. I am greatful to Collectables for their fabulous reissues.


WOW!! Collectables continues to amaze me with some of the impossible to find long out of print albums which they are reissuing on CD. Mindy Carson had been in show business for quite some time when she recorded this album in early 1958. She had success in both radio and TV as well as theater and Broadway. Much like the Jill Corey album which was recently released by Collectables (COL 7585) we hear two sides of Mindy on this album. Side one with the Glenn Osser orchestra is strictly slow ballads, while side two with the Sherman Edwards orchestra is all up-beat numbers. All the songs have "Baby" in the title, hence the album name. Hopefully Collectables will release the album in stereo as it was recorded during that early phase of stereo recording at Columbia. Like the Jill Corey album it was never available in stereo from Columbia. Mindy's singing is pure straight-forward interpretation without gimmicks and the arrangements by both men suit her perfectly. It'll be nice to have some of her singles as well...she did a version of "Sweet Georgie Brown" which is terrific. Collectables continues to delve into the old pop catalog of Sony Music much to the delight of us fans.