A spy sets out to foil a profiteer looking to destroy the oil industry on the eve of World War II. 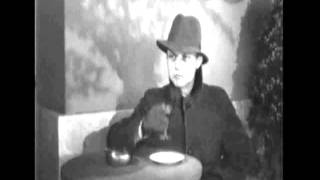 Jeffrey Clavering is a disgraced former spy for the British government. He is a given the chance to redeem himself when England is threatened by a megalomaniacal industrialist, Nikolai Kamarov. The profiteer has come into possession of oil fields which he plans to sell to an enemy nation. This upset of the balance of power will inevitably lead to a world war. Jeffrey must use his former relationship with Kamarov's wife, Sandra, to stop the madman. But saving the world and his reputation may fall by the wayside when he discovers that Sandra still loves him.

This stylish spy film from Republic Pictures stars Alan Marshal, an Australian-born actor who could always be counted on to play suave roles (his similarity to Errol Flynn has often be noted.) He is best remembered for his later supporting parts in The Adventures of Sherlock Holmes, The Hunchback of Notre Dame (both 1939), The White Cliffs of Dover (1944) and House on Haunted Hill (1959). Invisible Enemy also features a typically eccentric performance from Dwight Frye. After playing Renfield in Dracula (1931), Frye became an ubiquitous presence in 1930s horror films, including Frankenstein (1931), The Invisible Man (1933), and Bride of Frankenstein (1935).

BONUS: THIS THEATRE AND YOU (BW, 1948): Produced by the Academy of Motion Picture Arts and Sciences, this film shows the importance of the local movie theatre to the well-being of the community. Did you know that historical melodramas are a vital source of information for education-starved children? Find out all this and more in this vintage short subject narrated by Art Gilmore.

Spies | Espionage | Detective | Crime | Spy
This product is made-on-demand by the manufacturer using DVD-R recordable media. Almost all DVD players can play DVD-Rs (except for some older models made before 2000) - please consult your owner's manual for formats compatible with your player. These DVD-Rs may not play on all computers or DVD player/recorders. To address this, the manufacturer recommends viewing this product on a DVD player that does not have recording capability.