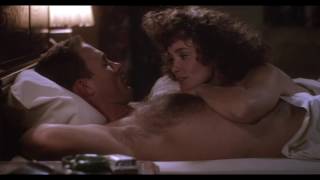 In Karel Reisz's SWEET DREAMS, Jessica Lange stars as Patsy Cline, the ill-fated country singer whose trembling, emotion packed renditions of "Crazy," "Sweet Dreams," and "I Fall to Pieces," made her one the most enduring voices in all of American popular music. Starting out by performing more standard country songs in little dives and honky-tonks in Virginia, Patsy rose to national prominence after her manager Ted Healy matched her voice to her now famous bittersweet love songs. Unfortunately, her own love life often mirrored the sadness in her songs. We see her choose to "stand by her man," as Loretta Lynn sang in COAL MINER'S DAUGHTER. That film, similar to SWEET DREAMS in that it's another country singer's bio that shows us the professional success and personal heartache of women during the 1950s. Save for the music, this could be any woman's story of a love-hate marriage. Patsy's abusive husband, the all too perfectly named Charlie Dick (Is it any wonder she choose to continue to use her first husband's name') is played with a nice blend of love, jealously, and malice by Ed Harris. As Patsy's mother, Ann Wedgeworth gives a superb portrait of a sweet but steel-cored Southern woman on whom Patsy is as emotionally dependent as she is on her husband. Their scenes together, full of tangy Southern aphorisms, have a wonderful bite and sparkle.

SWEET DREAMS is a film biography of country-western singer Patsy Cline, whose fast rise to stardom ended prematurely in a tragic plane crash. The film focuses on Cline's marriage to Charlie Dick, a charming, manly ne'er-do-well. Charlie's lack of self-confidence makes him ill-equipped to deal with his wife's sudden fame. This leads to strife in the marriage, made worse by Charlie's drinking, cheating, and abuse.
Songs include "Crazy," "Walking After Midnight," and "Sweet Dreams."

Sleeping With the Enemy (DVD)
$5.80 Super Savings
Add to Cart