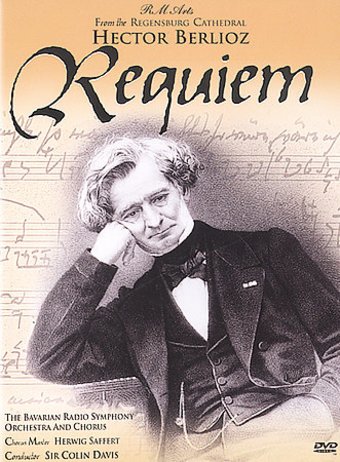 The legendary French romantic composer Hector Berlioz wrote what is widely considered his masterpiece, REQUIEM (GRANDE MESSE DES MORTS), to commemorate the French soldiers who perished in the battle of Algeria. This acclaimed performance was filmed at the breathtaking Regensburg Cathedral by the Bayerischer Rundfunk Symphony Chorus and Orchestra. Renowned British conductor Colin Davis takes the baton.

One of the greatest musical figures of the French Romantic movement, Hector Berlioz wrote his Requiem, "Grande Messe des Morts," for soldiers killed in the Algerian campaign. The magnificent Regensburg Cathedral is a perfect setting for this recording, conducted by Colin Davis with the Bayerischer Rundfunk Symphony Chorus and Orchestra in a moving performance of this monumental work, which climaxes with the ringing of the cathedral bells.

Yuja Wang
Through the Eyes of Yuja
$28
Add to Cart

20%off
Michel Legrand and the Cinema
$24.10 Super Savings
Add to Cart