Guiseppe Sinopoli - Dreampaths of Music: The Two Eyes of Horus 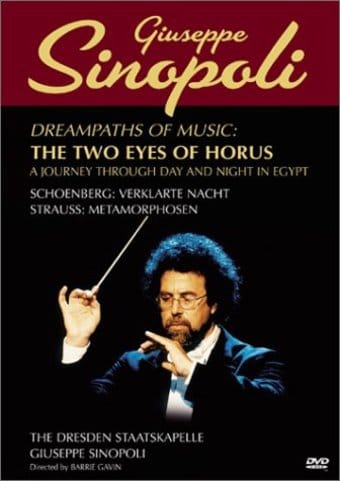 Italian maestro Guiseppe Sinopoli used his archeological expertise to imbue the Western European classic music that he conducted with the mythology and philosophy of the Ancient Egyptian world. This release, DREAMPATHS OF MUSIC, is an example of this successful combination. Threading seamlessly together performances of Schoenberg's "Verklarte Nacht" and Richard Strauss's "Metamorphosen" with footage of Egypt, the film celebrates Sinopoli's unique vision.

Giuseppe Sinopoli was principle conductor of the internationally-acclaimed Dresden Staatskapelle. An avid archeologist, he was fascinated with all things Egyptian and set out to create a program that combined his passion for the music of Western Europe with the art and philosophy of Pharaonic Egypt. "The Two Eyes of Horus" interweaves location footage from Egypt, with Schoenberg's "Verklarte Nacht" and Richard Strauss's "Metamorphosen." Sinopoli utilizes the two famous pieces for string orchestra to celebrate the majesty and myths of the ancient Egyptian world.