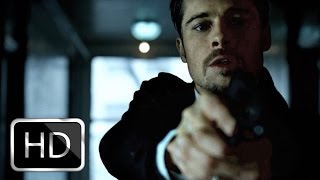 "Oh, wonderful. Very moody."
- A detective at the first murder scene
"When you want somebody dead, you drive by and shoot them. You don't risk the time it takes to do this...unless the act itself has meaning."
- Detective Somerset (Morgan Freeman) to Detective Mills (Brad Pitt) and police captain (R. Lee Ermey)
"If we catch him and he turns out to be the Devil, I mean, Satan himself, that might live up to our expectations. But he's not the Devil--he's just a man."
- William Somerset to David Mills about John Doe
"Why do we gotta sit here rotting, waiting till the lunatic does it again'"--Mills to Somerset
"It's dismissive to call him a lunatic. Don't make that mistake."--Somerset
"Come on, he's insane. Look! Right now he's probably dancing around in his grandma's panties, yeah, rubbing himself in peanut butter."
- Mills
"This guy's methodical, exacting, and, worst of all, patient."
- Somerset
"I admire you. I don't know how you found me but imagine my surprise. I respect you law enforcement agents more every day....I'll be readjusting my schedule in light of today's little...setback. I just had to call and express my admiration. Sorry I had to hurt one of you, but I didn't really have a choice, did I' You will accept my apology, won't you' I feel like saying more, but I don't want to ruin the surprise."
- John Doe to Mills and Somerset over the phone
"'About the only thing we know about that guy right now is that he's independently wealthy, well educated, and totally insane."
- police captain to Mills and Somerset about John Doe
"Wanting people to listen, you can't just tap them on the shoulder anymore. You have to hit them with a sledgehammer. And then you'll notice you have their strict attention."
- John Doe to Mills and Somerset
"You can't see the whole complete act yet. But when this is done...when it's finished...it's going to be...people will barely be able to comprehend it, but they won't be able to deny."--John Doe to Mills
"Could the freak be anymore vague' I mean, as far as masterminds go..."--Mills to Somerset
"I really can't wait for you to see. I really can't. it's really going to be something."--John Doe
"Well, you know what' I'm going to be standing right next to you. So when this big thing happens, you be sure to let me know, because I wouldn't want to miss it."--Mills
"Don't worry...you won't. You won't miss a thing."
- John Doe
"What do you got'"--Mills to Somerset as they scan the area
"A dead dog."--Somerset
"I didn't do that."
- John Doe
"Ernest Hemingway once wrote, 'The world is a fine place and worth fighting for.' I agree with the second part."
- Somerset in voice-over

Gluttony, greed, sloth, envy, wrath, pride, and lust--these are the seven deadly sins that are being punished with unimaginable cruelty and calculation by an enigmatic killer in David Fincher's bleak thriller SEVEN. Set in a perpetually gloomy unnamed city, the film follows Somerset (Morgan Freeman), a retiring police detective, as he experiences his final week on the job, reluctantly working with assertive newcomer Mills (Brad Pitt). When an obese man is found brutally murdered in his home, the seasoned Somerset realizes this is no ordinary killing--someone tortured him because of his appetite. Slayings that reflect the sins of greed and sloth soon follow, leading Somerset and Mills on a desperate search to find the mysterious John Doe, who is responsible for these methodical murders. As the case builds to a startling conclusion, both Somerset and Mills become more involved than they ever could have imagined.

After a brief opening scene, SEVEN immediately cuts to a highly stylized title sequence. An intricate collage of books and photos, scissors and razors, and blood and skin eerily captures the dark, graphic tone of Fincher's intriguing mystery. The film cleverly avoids depicting most acts of violence onscreen, focusing instead on the cryptic remains of the crimes, allowing viewers to investigate along with the detectives. An example of nearly flawless filmmaking, the movie features a meticulously crafted screenplay, brilliant photography and design, sure-handed direction, and excellent performances from the entire cast. All of these elements combine to amazing effect in the film's unforgettably stunning finale.

In this bleak and gruesome thriller, an idealistic young cop and his grizzled, burned-out partner go after a serial killer whose ghastly crimes symbolize the seven deadly sins.

The Silence of the Lambs (FS)
$8.70 Super Savings
Add to Cart

The Silence of the Lambs (Blu-ray)
$34.50 Super Savings
Add to Cart