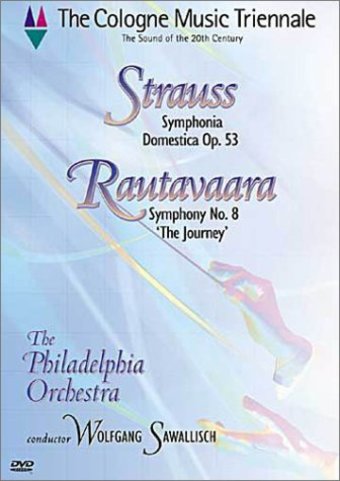 With a reputation for mixing the traditional with the new and original, the Philadelphia Orchestra is one of the classical world's most interesting orchestras to observe. Performing live at the Cologne Music Triennale, the acclaimed ensemble--conducted by famed maestro Wolfgang Swallisch--performs a remarkable program which includes Strauss' "Symphonia domestica Op. 53" and the European premiere of "Symphony No. 8 (The Journey)" by Einojuhani Rautavaara.

The Philadelphia Orchestra is one of the world's most dynamic ensembles, with a reputation for maintaining the highest standards of traditional symphonic music while standing at the forefront of new repertories. This concert was recorded live from Cologne during the Music Triennale and features the great Wolfgang Sawallisch conducting a program which opens with the European premiere of Einojuhani Rautavaara's "Symphony No. 8 (The Journey)" and is followed by Richard Strauss' "Symphonia domestica Op. 53."