Tarzan and the Valley of Gold
Warner Archive Collection (series)

When authorities ask Tarzan what he'll need to pursue a crime kingpin and his commandos through the wilds of Mexico, the Ape-Man requests only a good knife, a sturdy rope and some soft leather to fashion into a loincloth. 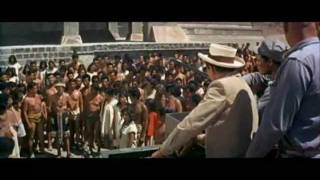 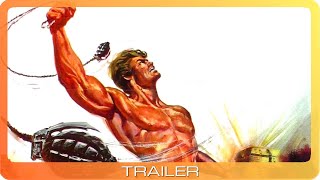 When authorities ask Tarzan what he'll need to pursue a crime kingpin and his commandos through the wilds of Mexico, the Ape-Man requests only a good knife, a sturdy rope and some soft leather to fashion into a loincloth. "Casual but practical," he explains to the astonished officials. It's a new day for fans and for the jungle lord when ex-NFL linebacker Mike Henry grabs the vine for the first of his three portrayals of a Tarzan who has one foot in the power-suited, briefcase-toting urban world and another in the untamed wilds. This new action hero will need all his skills -- from relying on animal instincts to commandeering a tank -- in this adventure that ends with an explosive showdown in an uncharted city filled with gold.

In this jungle adventure, Tarzan is first seen wearing a business suit instead of a loincloth, but when he learns that a young boy who supposedly knows the location of a fabulous jungle treasure has been kidnapped by an evil explorer, he sheds his city clothes and hits the trees. Once in the jungle, he warns the chief who guards the gold mines that the explorer is planning to attack. The villain gets his comeuppance after he is smothered in gold dust.

Adventure | Superheroes | Jungle | Kidnapping
This product is made-on-demand by the manufacturer using DVD-R recordable media. Almost all DVD players can play DVD-Rs (except for some older models made before 2000) - please consult your owner's manual for formats compatible with your player. These DVD-Rs may not play on all computers or DVD player/recorders. To address this, the manufacturer recommends viewing this product on a DVD player that does not have recording capability.