Tarzan and the Jungle Boy

Tragedy left him orphaned and alone, forced to fend for himself in the jungle wilds. Over the years he survived and thrived, growing in strength, skill and mastery. Only someone who's been through the same experience can track and find him. 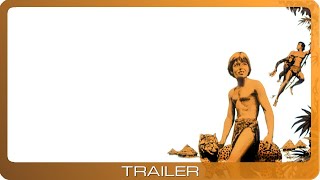 Tragedy left a boy orphaned and alone, forced to fend for himself in the jungle wilds. Over the years he survived and thrived, growing in strength, skill and mastery. Sound like a hero you know? He's the elusive teen the natives call Jukaro, and only someone who's been through the same improbable experience can track and find him.

For the third and last time, former professional-football linebacker Mike Henry offers a reinterpreted Ape-Man who's accustomed to both the civilized world and the wild. He's a man of action in either realm and action is at the forefront as his search for Jukaro leads to conflict with a fierce territorial warrior (Olympian Rafer Johnson, who also battled Mike Henry's Tarzan in Tarzan and the Great River).

As king of the jungle, Tarzan (Mike Henry) helps the female journalist Myrna (Alizia Gur) look for a mysterious jungle boy. Eric (Ronald Gans) has survived a plane crash which killed his father seven years earlier. To find the boy, the two team up to battle evil native Magambi (Rafer Johnson) and the usual jungle dangers. The party must travel into the wilds of Zagunda to save the boy, who for the last seven years has managed to get along just fine on his own in this predictable, routine jungle romp.

Adventure | Superheroes | Jungle
This product is made-on-demand by the manufacturer using DVD-R recordable media. Almost all DVD players can play DVD-Rs (except for some older models made before 2000) - please consult your owner's manual for formats compatible with your player. These DVD-Rs may not play on all computers or DVD player/recorders. To address this, the manufacturer recommends viewing this product on a DVD player that does not have recording capability.