What happens in the kitchen ends up on the plate. 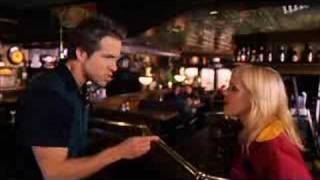 Upon his arrival at Shenaniganz, a suburban chain restaurant bedecked with decorative knick-knacks, new wait staff trainee Mitch (John Francis Daley) is placed under the wing of Monty (Ryan Reynolds), a veteran who first informs his young charge that all male employees engage in a game in which the object is to get others to unwittingly look at your genitals. Unwittingly, Mitch has stumbled into a world where servers--such as angry Naomi (Alana Ubach), and coquettish Serena (Anna Faris), along with a rowdy kitchen staff--led by randy Raddimus (Luis Guzman)--are at constant war with their demanding, low-tipping customers. Meanwhile, waiter Dean (Justin Long) must decide whether to take a promotion to manager or set out for brighter horizons beyond birthday songs and whimsically-named appetizers.

The first film from writer-director Rob McKittrick has a low-budget charm that is well suited to the realistic desperation below its crowd-pleasing gross-out humor. Long is a likeable straight man to Reynolds' wisecracking ringleader, while Chi McBride and indie veteran Ubach (CLOCKWATCHERS) add texture in their supporting roles. A cousin in crudity to Kevin Smith's subdivision-themed comedies, WAITING will score a bull's-eye with service industry pros or anyone who prefers their comedy to originate from below the belt.

Employee of the Month
$8.70 Super Savings
Add to Cart