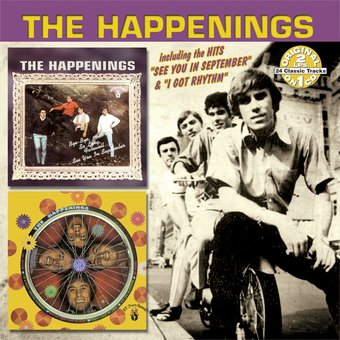 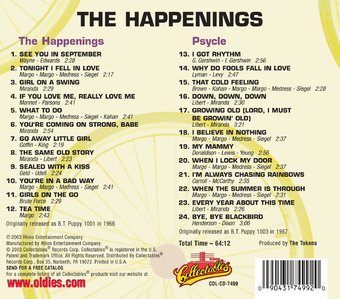 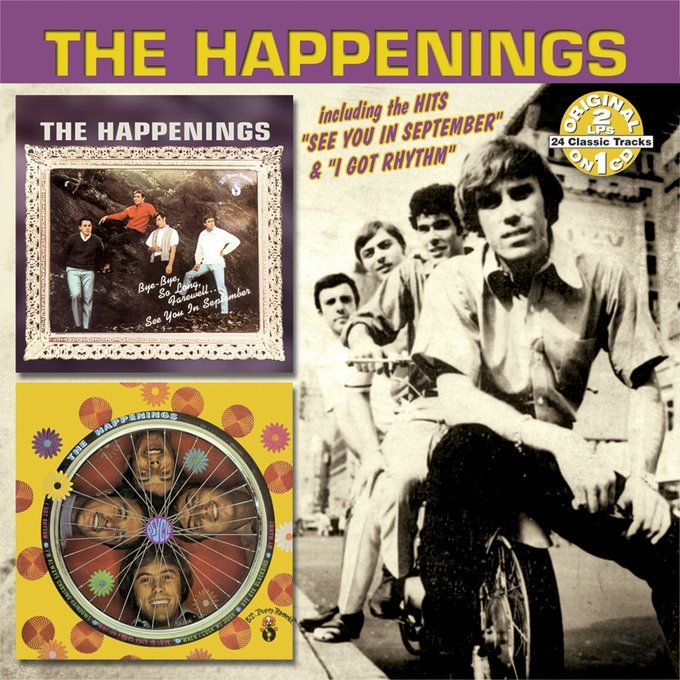 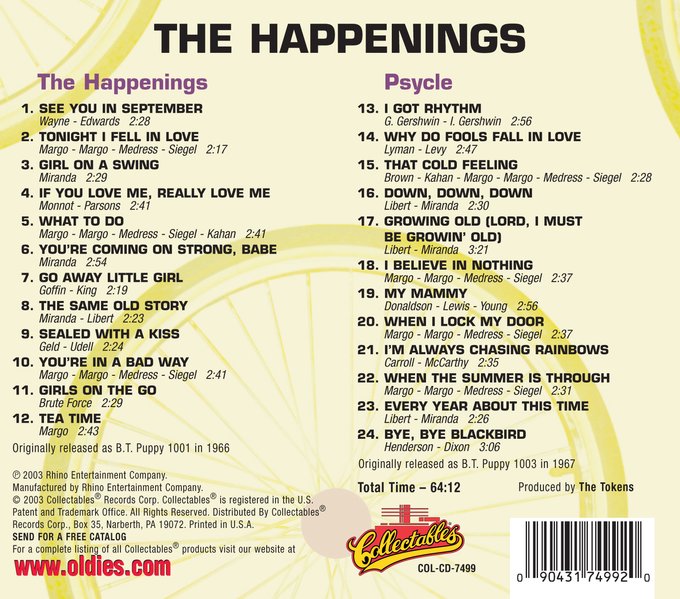 Hailing from Patterson, NJ, the Happenings had a string of pop hits in 1966 and 1967. These two albums were produced by the Tokens and subsequently released on their label, B.T. Puppy. This pairing of previously long out-of-print albums features their hits "See You In September" (#3 Pop Singles), "I Got Rhythm" (#3 Pop Singles) and several other notable charting singles.

2 LPs on 1 CD: THE HAPPENINGS (1966)/PSYCLE (1967).
Originally released on B.T. Puppy.
Liner Note Author: Hal Halverstadt.
The Happenings are best-known for their hit single "See You in September," which is a sunny slice of sunshine pop featuring happy, bouncy vocals and intricate harmonies reminiscent of great white doo wop groups like the Four Seasons and the Tokens, who were not-so-coincidentally the Happenings' mentors and producers. Collectables has reissued both of the Happenings' records on one disc: 1966's The Happenings and 1967's Psycle. Both discs feature the stunning vocal gymnastics of their hit single and their updated doo wop sound coated with an easy listening gloss of strings on a not-very-thick Wall of Sound. Most of the songs on their debut were written by the members of the Tokens and are not bad but not that memorable, as they follow the formula of their hit but pale in comparison. An exception to this is the strange "You're in a Bad Way," which is a spooky track filled with death-related imagery that sports a surprisingly funky backbeat. Their second album is markedly inferior to their debut. The music is pitched even further into easy listening territory and the vocals are softer and bland. The songs written by the Tokens are still fairly solid, but the group covers some standards like "I Got Rhythm" and "Bye Bye Blackbird" that sound destined strictly for elevators. Another harmony group, Harpers Bizarre, was also covering standards at this time, but unlike the Happenings, they were interpreting them in an interesting fashion. The mock-gospel number "Growing Old (Lord, I Must Be Growing Old)" is embarrassing, but not as much as their Beach Boys-meets-Four Seasons version of "My Mammy." There is one sunshine pop gem hidden near the end of Psycle, the melancholy "When the Summer Is Through," but it is not enough to offset the disappointment of the rest of the album. The Happenings set the bar very high with the amazing "See You in September" and failed to come anywhere near those heights again. Die-hard fans of late-period white doo wop may find this record to be an OK purchase, but anyone else should just seek out the hit on a compilation and forget about this disc. ~ Tim Sendra