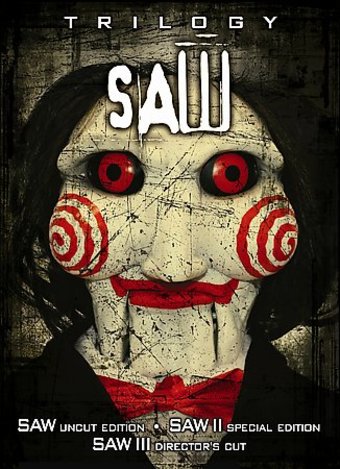 SAW: Be prepared to be scared. James Wan's directorial debut, written by and starring Leigh Whannell, is a violent, bloody, psychologically exhausting and exhilarating exercise in terror. Adam (Whannell) and Dr. Gordon (Cary Elwes) are chained in a vile, disgusting bathroom, separated by a bloody corpse holding a gun and a tape recorder. They are each given a saw--the only obvious way out is to cut one of their feet off. A serial killer who specializes in torturing morally bereft strangers is playing a game with them: Gordon has less than eight hours to kill Adam or else the doctor's wife (Monica Potter) and daughter (Mackenzie Vega) will be murdered. As the two men engage in a battle of wits, alternately trying to help each other and secretly attempting to win the game, a series of flashbacks reveals the history of the madman and the pair of detectives (Danny Glover and Ken Leung) handling the case. Some of the torture scenes are excruciatingly horrible and hard to watch, a real treat for fans of the genre.

SAW II: Jigsaw is back for more gory fun in SAW II, but this time he comes out from behind the mask to terrorize a troubled cop face-to-face. Tobin Bell reprises his brief role as Jigsaw in the first film with a major starring turn in the sequel. Dying of cancer, Jigsaw lets himself get caught, only to show Detective Eric Matthews (Donnie Wahlberg) that his son, Daniel (Erik Knudsen), has been taken hostage with seven other people, all of whom have been placed in a house of horrors with only the slimmest chance of escaping with their lives. Jigsaw promises Matthews that Daniel will live only if the cop follows the rules of the game, but time is running out, as the captives' bodies have been poisoned with a toxin that will soon destroy them. Meanwhile, in the dank, mysterious, booby-trapped house, the ever-more-desperate group of people (including Shawnee Smith, who is back as Amanda, the lone survivor of SAW) furiously try to find their connection to each other and a way out, but blood and violence lie in their path. Like its predecessor, SAW II is a frightening thriller filled with plenty of tricks and treats to satisfy even the most jaded horror fan.

SAW III: As SAW II concluded, Jigsaw (Tobin Bell) was dying. But that doesn't mean his penchant for playing games of torture and violence is ending. In SAW III, the murders start occurring again, and Kerry (Dina Meyer) is back on the case, although she thinks this time it might be the work of a copycat. She's only partly right: Amanda (Shawnee Smith), the only victim to have survived both movies, has joined Jigsaw as his apprentice, leading the way through a terrifying game involving Lynn (Bahar Soomekh), a doctor in an unhappy marriage, and Jeff (Angus Macfadyen), a distraught man who is having trouble getting over the loss of his son (Stefan Georgiou) at the hands of a drunk driver. Amanda has captured Lynn and placed her in a neck brace that is linked to Jigsaw's heart monitor; she must keep Jigsaw alive or else the brace will explode. Meanwhile, Jeff is sent on a dangerous journey on which he faces all the people involved in the light penalty his boy's killer received--and it is up to him whether he will seek vengeance or offer forgiveness. Helmed by SAW II director Darren Lynn Bousman and written by original SAW screenwriter and star Leigh Whannell (with a story by Whannell and SAW director James Wan), SAW III is an intricately designed, gruesome thriller with a hard-driving soundtrack featuring songs by Slayer, Helmet, and All that Remains.