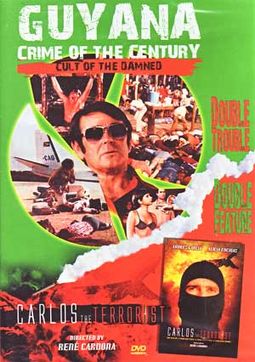 GUYANA: CRIME OF THE CENTURY: Scenes so brutal they were dubbed THE CRIME OF THE CENTURY unfolded in Guyana in 1978, and are retold in this dramatization of events. The small South American country had provided a haven for a maverick American preacher by the name of Rev. Jim Johnson (Stuart Whitman), otherwise known as Jim Jones. Afraid that the CIA were after him, Jones and his sizeable congregation moved to Guyana, where they practiced away from prying eyes. But under the spell of Jones, something went horribly wrong. Orgies, torture, and violence proliferated throughout the community, with Jones leading his followers on a journey into the dark reaches of the soul, reaping some unholy consequences as a result. Director Rene Cardon Jr's attempt at retelling the story of Jones and his cohorts is a powerful, moving work that looks at how a potent mixture of charisma, confidence, and paranoia can hold deadly sway over others. GUYANA: CRIME OF THE CENTURY is a startling trip into a world which few would imagine could possibly exist.

CARLOS THE TERRORIST: After killing his underworld boss, a man turns to the CIA for help, but finds the opposite extreme of terrorism as he must answer to the CIA's double-cross demands for the return of his kidnapped family. This is the story of a desperate man on the run.