The first was for himself. The second for his country. This time it's to save his friend. 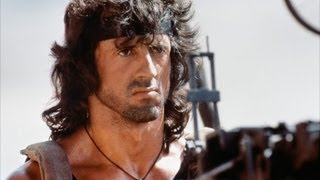 RAMBO III, which could be called "Rambo in Afghanistan," is set in 1988, near the end of the Soviet Union's involvement there. At the beginning of the film, John Rambo (Sylvester Stallone) is living a secluded life in a Buddhist monastery in Thailand. When Rambo's close friend and mentor from the American military, Colonel Trautman (Richard Crenna), asks for Rambo's help with a top-secret mission in Afghanistan, Rambo declines. Trautman goes in anyway and is captured by a ruthless Russian commander. In response, Rambo leaves his peaceful life, determined to rescue Trautman. Armed with only a handful of glow sticks and a dozen detonators, Rambo travels to Pakistan where he meets with a group of Mujaheddin freedom fighters who agree to lead him across the border into Afghanistan. On horseback, Rambo and the Mujaheddin approach the daunting Afghan landscape--high cliffs, jagged desert mountains, and networks of underground tunnels and caves. But before they even reach the prison where Trautman is held, the Russians head them off in a high-speed helicopter chase through steep ravines. From this point forward, the action never abates. Rambo, whose complexion is a deep crimson throughout the film, scales cliffs with his bare (bleeding) hands, and defies husky guards and scores of heavily armed Russian soldiers. There are many intense parts of RAMBO III, including a disturbing look inside a shop that sells machine guns and prosthetic limbs to mine victims, and several action sequences in which Afghan soldiers use American-supplied shoulder-mount rocket launchers against the Soviets. But perhaps the most memorable scene of the film is a close-up on Rambo, alone in a dimly lit cave, where he removes a bullet from his stomach and then performs a dazzling medical trick with the leftover gunpowder.