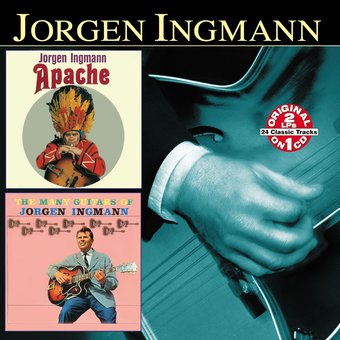 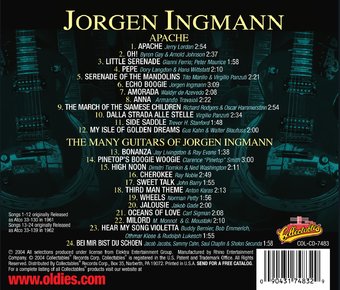 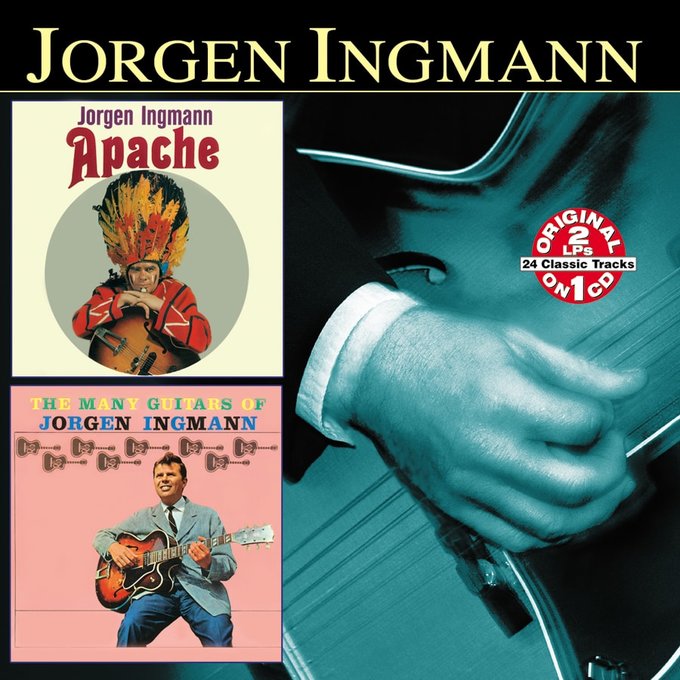 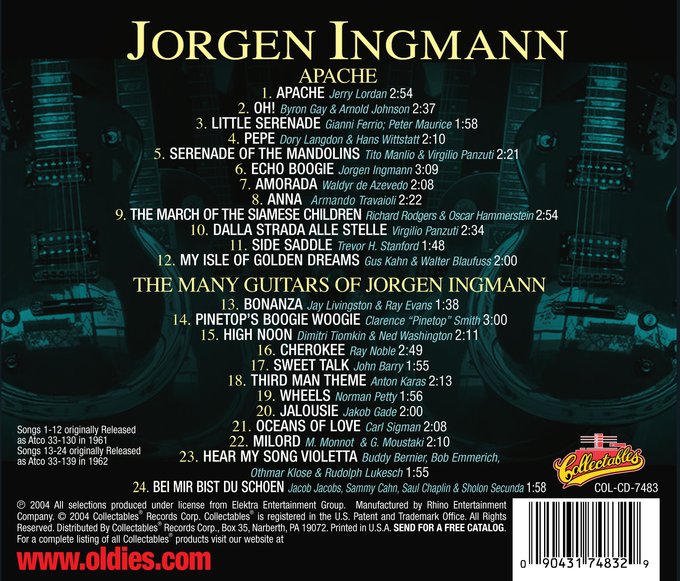 Get email alerts for Jorgen Ingmann
14 ratings
Available: Usually ships in 1-3 business days
11 copies available
Add to Cart
Add to Wishlist
Format:  CD
item number:  COL 7483
Related products:
The Shadows: The Very Best of the Shadows: 62 Original Recordings (3-CD) for $10.98
The Best of Duane Eddy [Curb] for $15.70
The Ventures Play Telstar - The Lonely Bull (And Others) / The Ventures In Space for $12.50

Prior to his success on the Pop charts, Danish guitarist Jorgen Ingmann worked with jazz violinist Sven Asmussen in the swinging group, The Swe-Danes. Best known for his 1961 #1 instrumental hit "Apache," the two original Atco albums included here are among his best.

2 LPs on 1 CD: APACHE (1961)/MANY GUITARS OF JORGEN INGMANN (1968).
Personnel: Jorgen Ingmann (guitar); Svend Asmussen (violin).
Liner Note Author: Ira Howard.
Sounding like some sort of homegrown fusion of Les Paul and the Ventures, Jorgen Ingmann was a Danish guitarist who turned himself into a one-man band with the help of a multi-track home recording setup; laying down multiple layers of twang mutated through echo, reverb, and speed controls, Ingmann's product was distinctly and pleasingly weird enough to earn him an international hit single with "Apache," and this two-fer CD from Collectables features the man's two best-known albums, issued in the United States on Atco in 1961 and 1962. In the great tradition of Esquivel, most of Ingmann's music is easy listening material put to tape with a decidedly adventurous sonic approach, and while the 24 songs here never approach Esquivel's level of aural grandeur, those who are still looking for records for their Space Age Bachelor Pad will doubtless be pleased with the cheerful distortion, mingled melodic lines, and echoey mystery of this stuff. While the second half of the program features a few more recognizable covers (such as the theme from "Bonanza" and "The Third Man Theme"), the enjoyably wobbly results are consistent throughout, and the two albums get themselves over with in less than 55 minutes -- the man obviously understood concision along with his other talents. ~ Mark Deming


If you're playing guitar and if you aren't hooked on the most popular guitarists today and in the past, this would be an eye-opener for you.
This concerns the 1960's progressive music.
Jorgen Ingmann is best known for his 1963 'Eurovision Song Contest' hit with his wife, Grethe.
They performed 'Dansevise' there.
The record that is to be sold here contains besides others the number 'Amorada'. Try to play that on the guitar. It reminds me on AC/DC's 'Thunderstruck'. Compare these!
If you are into Shadows, Spotnicks, Ventures - well let's say 60's instrumentals - get this CD.