In a No-man's Land between North and South, You didn't fight for the Blue or the Grey... You fought for your friends and family. 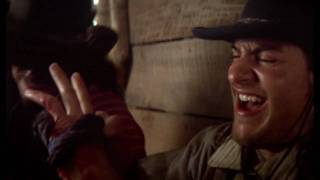 RIDE WITH THE DEVIL Trailer (1999) - The Criterion Collection

"You want my bacon'"
- Jack Bull (Skeet Ulrich) to Daniel Holt (Jeffrey Wright)
"I'll always know your rump from a mule now."
- Jack Bull to Miss Evans (Jewel)
"Before they built that church they built that schoolhouse. They rounded every pup into that schoolhouse because they fancied that everyone should think and talk the same freethinking way they do, with no regard to station, custom, propriety. And that is why they will win. Because they believe everyone should live and think just like them. And we shall lose because we don't care one way or another how they live. We just worry about ourselves."
- Mr. Evans (Zach Grenier) to Jake (Tobey Maguire) and Jack
"I felt something that day I never felt...I felt free."
- Holt to Jake

Director Ang Lee follows up the critically acclaimed THE ICE STORM with this look at the bloody, intense conflict between the pro-Confederate Bushwackers and the pro-Union Jayhawkers in Missouri during the Civil War. Pitting neighbor against neighbor, the war in the frontier state tested personal loyalties and often created strange alliances. The film, based on Daniel Woodrell's book WOE TO LIVE ON, follows the conflict through the eyes of two outsiders: a German immigrant's son (Tobey Maguire) and a free black man (Jeffrey Wright), both of whom fight for the Bushwhackers even though they are looked down upon by their fellow guerrillas. The acting is strong all around, the setting realistically grim and absorbing, and Frederick Elmes's photography is, as always, top-notch. Pop singer Jewel appears onscreen for the first time, playing a plucky Southern woman. A nuanced examination of the bonds of obligation, RIDE WITH THE DEVIL anticipates Lee's high-flying CROUCHING TIGER, HIDDEN DRAGON, both in theme and in pulse-pounding action. The film contains many standout action sequences, including a historically accurate re-creation of William Quantrill's infamous raid on Lawrence, Kansas.

RIDE WITH THE DEVIL is straightforward look at a group of Civil War pro-Southern Bushwackers--operating in the relative no-man's-land of Kansas and Missouri--who carry out guerrilla attacks on the Union army and its sympathizers. Ang Lee's film follows these marginalized outsiders as they pursue their fervent, ultimately doomed cause with an intense and bloodthirsty commitment.

Civil War | Justice | Romance | Theatrical Release | Based On A Novel