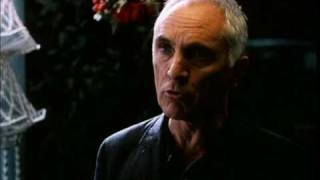 With THE LIMEY, director Steven Soderbergh has crafted a stylish revenge thriller that also contains a refreshing sense of humor. Wilson (Terence Stamp), a tough English ex-con, travels to Los Angeles to avenge his daughter's death, which he is convinced was not accidental. After meeting Ed (Luis Guzmán), a friend of his daughter's who sent him a letter informing him of her passing, he finds out about her affair with Terry Valentine (Peter Fonda), a drug-dealing, money-laundering record producer, and begins to hunt him down. Partnered with Ed as well as Elaine (Lesley Ann Warren), his daughter's former voice coach, Wilson encounters a near-fatal beating, is thrown from a building window, survives a dangerous car chase, and battles an army of L.A.'s toughest criminals. Soderbergh's follow-up to the critically beloved OUT OF SIGHT finds him in similar neo-noir waters, but this time he utilizes atypical editing and narrative technique for the film's entirety. In a striking move, he ingeniously incorporates footage of Stamp as a young man in Ken Loach's 1967 film POOR COW for truly realistic flashbacks. As the fuming Wilson--a hell-bent, white-haired avenging angel--Stamp proves, once again, to be a truly magnetic screen presence.

A dazzling revenge thriller set in the sun-soaked streets of Los Angeles, THE LIMEY follows a recently paroled Englishman, Wilson, who has traveled to America to investigate his daughter's tragic death. When he learns of her relationship with a powerful music producer, Terry Valentine, he embarks on a violent journey in order to exact revenge. Director Steven Soderbergh uses a striking editing style to add a deeper dimension to the proceedings. The result is a visually arresting motion picture that features another unforgettable performance from Terence Stamp.

Far from the Madding Crowd
$18.10 Super Savings
Add to Cart