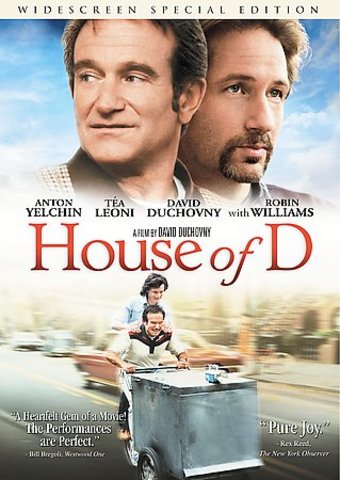 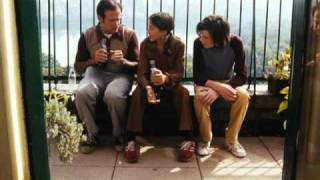 David Duchovny makes his feature-film debut as a writer-director in the very funny, very poignant HOUSE OF D. Living in Paris, Tom Warshaw (Duchovny) is an American expatriate who feels it is time to tell his wife and son the truth about what happened when he was a kid. The action then shifts to Greenwich Village in the 1970s, when young Tom (the remarkable Anton Yelchin) has recently lost his father and is trying to survive with his severely depressed mother (Duchovny's real-life wife, Tea Leoni). His best friend is an older, mentally challenged man named Pappass (Robin Williams); the two of them deliver meat together, go to the movies, and see each other in school, where Pappass is the assistant janitor. As his mother's mental state deteriorates, Tom becomes friendly with Lady (Erykah Badu), an inmate at the Women's House of Detention on Tenth Street; they talk about life and love, but Tom can't see her, as she speaks with him from behind the window of her cell up high in solitary confinement. When Tom starts falling for a rich girl, Melissa (Robin Williams's real-life daughter, Zelda Williams, in her feature-film debut), Pappass acts out, changing everything. Duchovny's film is both charming and moving, filled with believable characters caught in believable situations. The acting is uniformly excellent, as is the 1970s soundtrack, including songs by Van Morrison, the Allman Brothers Band, the James Gang, the Doobie Brothers, Stevie Wonder, and Elton John.