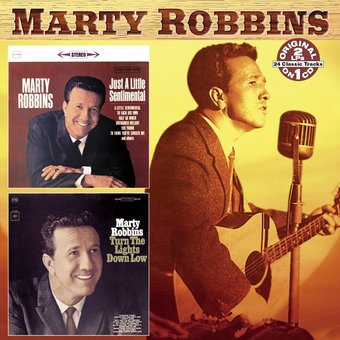 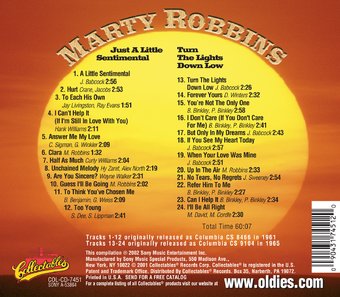 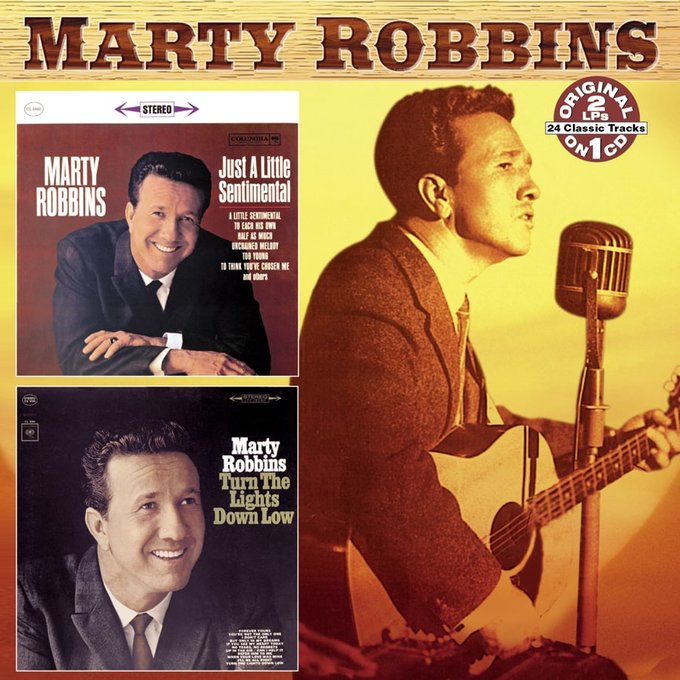 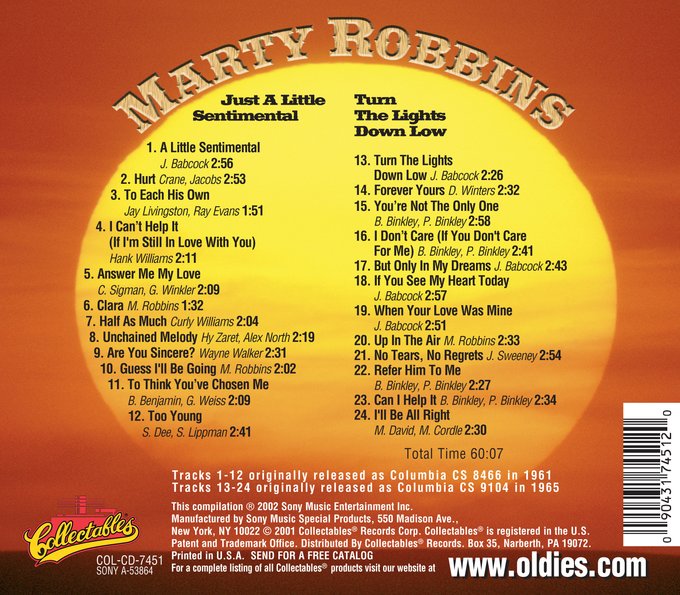 "Diverse" is a term easily applied to Marty Robbins. Never wanting to be labeled a "country" artist, he had several major pop hits (he even recorded fiddle tracks for Chuck Berry and Little Richard), recorded several Hawaiian albums, and also recorded with Ray Conniff ("A White Sport Coat (And a Pink Carnation)." Over the course of his career he had 94 charting hits, won a Grammy, and was inducted into both the Nashville Songwriters International Hall of Fame and Country Music Hall of Fame. The two albums on this single CD were originally released by Columbia in the early 1960s.

2 LPs on 1 CD: JUST A LITTLE SENTIMENTAL (1961)/TURN THE LIGHTS DOWN LOW (1965).
Originally released on Columbia.
Personnel: Marty Robbins (vocals).
Recording information: 03/10/1961-??/??/1964.
Along with Eddy Arnold, Marty Robbins managed to crossover between the pop and country charts throughout most of his career. Just a Little Sentimental and Turn the Lights Down Low were originally released on Columbia in 1961 and 1965, respectively, and had been out of print for years before Collectables reissued them in 2003. Romantic chestnuts like "Unchained Melody," "Are You Sincere?" "Too Young," and "Hurt" make up the majority of these discs. However Robbins also turns in beautiful renditions of two country classics from the Hank Williams songbook, "Half as Much" and "I Can't Help It (If I'm Still in Love With You)," that fit perfectly within the romantic theme. These reissues are recommended especially to those who only know the country side of Robbins. ~ Al Campbell

62%off
Marty Robbins
Sing Me Something Sentimental [Country Stars] (CD)
$4.98 on Sale
Add to Cart

62%off
Marty Robbins
Sing Me Something Sentimental [Country Stars]
$4.98 on Sale
Add to Cart