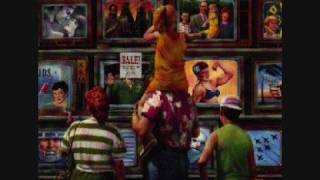 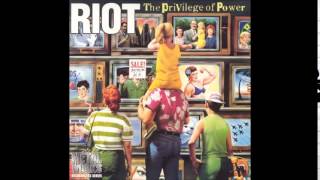 This 1990 release from New York-based heavy metal act Riot was the follow-up to their classic album "Thundersteel."

Riot: Tony Moore (vocals); Mark Reale (vocals, guitar); Don Vanstavern (bass); Bobby Jorzombek (drums).
Recorded at Greene Street Studio Recording and Bleeker Court Studio, New York, New York; between December 1988 and September 1989. Originally released on CBS (45121).
Like Queensr˜che's 1988 prog metal masterpiece Operation: Mindcrime, Riot's Privilege of Power works off of fear, paranoia, and conspiracy, employing ten complex tracks that work as a single unit. Where Mindcrime stuck to a straight narrative, working every Pink Floyd-ism it could into its disillusioned protagonist, Power takes a broader, less specific approach to its subject. The atmospheric snippets that tuck-point each song into place help maintain a general air of unease, eventually giving way to an ambiguous but entertaining revolution that lacks Queensr˜che's self-importance. Lyrically, the group does little to deviate from obvious metaphor and "Viking" simplicity -- in "metalspeak" something as mundane as an airplane ride ("Metal Soldiers") is described by shouting "We climb aboard the eagle made of steel" followed by a four-octave scream -- but "true blue" fans of heavy metal know the genre's scholarly limitations, and revel in its face-value descriptions of rebellion and honor. The bizarre use of a horn section (keyboards?) on tracks like "On Your Knees" and "Killer" actually works, adding a swaggering charm to the already hook-laden tunes. The ferocious "Dance of Death" brings to mind classic Judas Priest and features brutal guitar work by guitarist/songwriter Mark Reale -- he really is remarkable -- and elements of Iron Maiden run rampant throughout the rousing "Storming the Gates of Hell." The record loses its flow -- not its focus, as it never really has any -- with the dreadful "Little Miss Death" -- a study in "horned-hand" mediocrity -- and the obvious single "Maryanne," which -- although the vocals are outstanding and the slight melodic variation (mixed with car horns and other sonic oddities) is infectious -- is virtually a carbon copy of Boston's "More Than a Feeling." ~ James Christopher Monger