The Blood of Heroes R

10K ratings
Currently Out of Stock: We'll get more as soon as possible
Notify Me When Available
Add to Wishlist
Format:  DVD
item number:  W9AJ
Our customers love us! 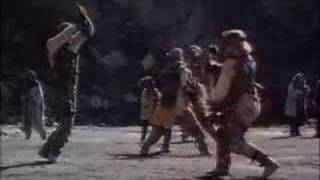 The Salute of the Jugger Trailer

In the futuristic sport of jugging, the way to victory is to maim and kill. A winning jugger team leader takes on a promising female apprentice and prepares for the final match against the team that expelled him years earlier. This is not just a fight for victory - it is a quest for revenge.

In the barren and desolate world of the post-apocalyptic era, a proud warrior known only as Sallow engages in a brutal sporting event called "juggers." Sallow was once a member of the League -- a ruling body which governs the sport -- but was summarily dismissed after committing a relatively minor infraction. Joined by a peasant girl named Kidda and a rag-tag group of outcasts, Sallow challenges the supremacy of the League by fielding his own team of rugged gladiators. The stakes of the resulting game are nothing less than life and death.

Never Back Down (Blu-ray)
$9.50 Super Savings
Add to Cart