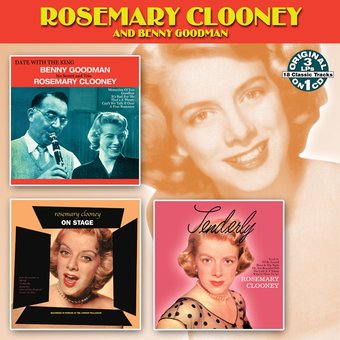 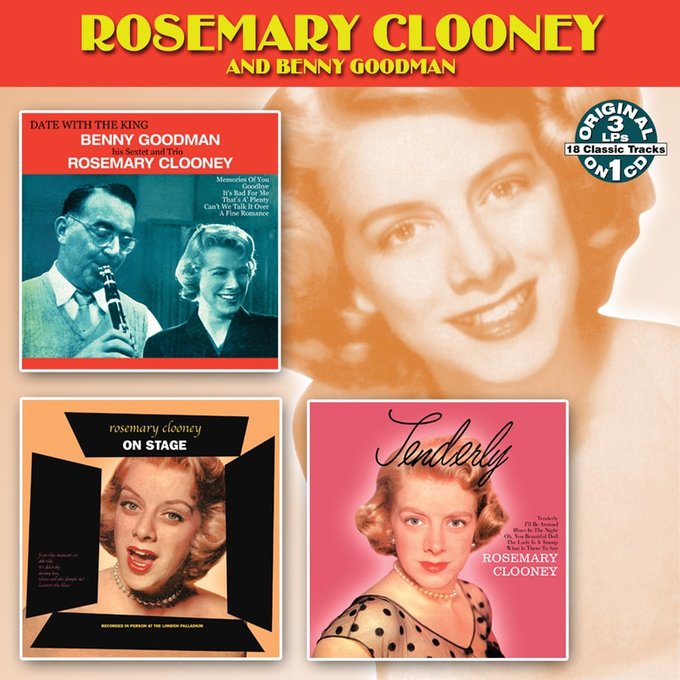 Three original albums on one compact disc! "A Date With The King" features Rosie in the company of the reigning "King of Swing," Benny Goodman. "On Stage" was recorded live at the Palladium in London, and later released by Columbia. "Tenderly" was an extended-play release that contains recordings going back as far as 1949. Percy Faith accompanies Rosemary on three of the tracks.

3 LPs on 1 CD: DATE WITH THE KING (1956)/ON STAGE (1956)/TENDERLY (1955).
Originally released on Columbia 10" LPs.
Personnel: Rosemary Clooney (vocals).
Liner Note Author: Al Fichera.
This discount-priced reissue CD combines the contents of three 10" LPs associated with Rosemary Clooney and originally released by Columbia Records in 1955 and 1956. Ten-inch LPs usually contained eight songs, but these three only contained six each, for a total of 18 tracks in about 57 and a half minutes. The three present different sides of Clooney. Date With the King (tracks 1-6) isn't really a Rosemary Clooney solo collection; it's a Benny Goodman album on which Clooney sits in for three numbers. Goodman wanted to record Cole Porter's clever "It's Bad for Me" in 1955, and Columbia insisted that Clooney join in for added commercial appeal; she and Goodman share vocal duties on the song. Then the label wanted an album in addition to the single, so Goodman obliged with some sextet numbers and even let Clooney sing on "Memories of You" (with only a trio) and "Goodbye." The result is a nice little jazz set. Tracks 7-12 made up On Stage, supposedly a Clooney live album cut at the London Palladium, though annotator Al Fichera, pointing to the recording dates, questions whether it is really a treated studio recording with applause dubbed in. Whatever it is, there are some excellent Clooney performances, especially a version of Porter's "It's Delovely" preceded by an introduction in which she discusses her method of picking material for a concert. Tenderly (tracks 13-18) was actually a compilation of tracks recorded between 1949 and 1953, starting with the title song, said to be a gold single for Clooney. She mixes up ballads with rhythm numbers like "Blues in the Night" (also a chart hit for her) and handles both well. Although the three original LPs take different approaches, when joined together they give a well-rounded portrait of Clooney in her prime. ~ William Ruhlmann

54%off
Jo Stafford
Getting Sentimental Over Tommy Dorsey (CD)
$5.98 on Sale
Add to Cart