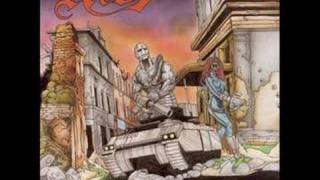 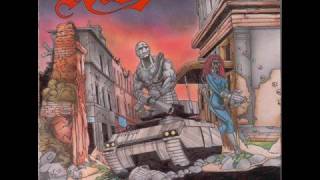 New York-based heavy metal act Riot was formed in 1976 by guitarist/songwriter Mark Reale. After dissolving the band, Reale reformed the group in 1986 and this album was the band's comeback effort. Although it peaked at only #150 on the Billboard 200 chart in 1988, it is a classic metal album.

"I was born on these streets, years ago/I was the king of the neighborhood," sings vocalist Tony Moore during "Bloodstreets." Such a line probably revealed the sentiment of guitarist Mark Reale perfectly, and it also encapsulates the mood of Thundersteel. A comeback album after several years of inactivity, this 1988 album is an unheralded classic. The disc takes cues from everything that was metal at the time, combining classic European styles reminiscent of Judas Priest's heavier moments (a premonition for Painkiller), thrashing guitars and pounding percussion indicative of the then-burgeoning underground thrash movement (it's got more riffs than Anthrax ever had), and undertones of the hair metal that was riding the charts at the time (especially in appearance) into a cohesive moment of refined ferocity. Perhaps it was this diversity that doomed the record to commercial failure at the time of its release, or even the abundance of dexterous musical histrionics that at times overwhelm Thundersteel (it was well-received in Japan and other areas where techno-metal always had a sizable audience). Regardless, Thundersteel has everything that makes metal great in all its overstated glory, making the disc an unappreciated classic. ~ Brian O'Neill